Zoe Kurtz has been studying violin for an impressive ten years. But three years ago, at age 13, she decided it was time to take her musical talent to the streets.

“Since I know how to play violin, and people in my neighborhood appreciate music, I wanted to play on the street [for charity],” explains the Takoma Park, MD, high school student. “It was so scary the first time… But I wanted to use what I know, which is violin, to help people.”

That interest in helping others began in childhood, when Kurtz first saw magazine photos of kids from other countries living in poverty. “Until I saw those photos, I thought all water was clean and everyone had enough to eat. It made me realize that if I wanted people to experience the same things that I took for granted, I was going to have to do something about it,” says Kurtz. She wanted her music to support a global organization, so her mom helped her select Oxfam America as her charity of choice.

Nowadays, Kurtz spends most summer Sunday afternoons at her local farmers’ market, performing classical, tango, and bluegrass songs for an audience of regular fans. She collects $40 to $60 in a week in donations, mostly change and small bills tossed into her violin case. 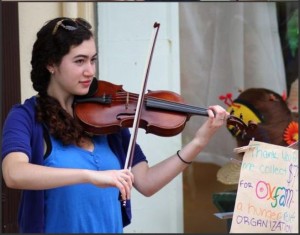 “When I play, I have a little sign on my stand: ‘Thank you for helping me donate x amount to Oxfam so far.’ I keep changing the sign every $100,” Kurtz explains. Her latest sign reflects a fundraising milestone: $1,000.

Kurtz plans to continue playing music for Oxfam at least until she heads off to college next year. And for now, she says, she wants to do something to thank those who helped her along the way.

“I want to throw a party to show the people who constantly give me money that I appreciate them,” she adds. “They are really supportive and encouraging.”

To watch Kurtz play and hear a sample of her music, check out the video above.