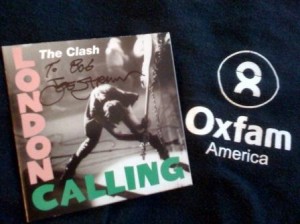 Almost everyone who works or volunteers at Oxfam has had an “epiphany moment.” Ask us about it, and we’ll tell you what inspired us to change our lives, pick up the baton of volunteerism, or put our talents to work helping Oxfam accomplish great things here and abroad.

My story, though, is a little bit different than most. It involves Joe Strummer, the late leader of the iconic British political rock band The Clash.

I shared this story the weekend before last, when I participated in the annual training of Oxfam Action Corps volunteer leaders at our office in Washington, DC. As usually happens at these types of gatherings, there was much discussion about the “epiphany moment” in all its forms. There were stories about travels to Africa or Central America, where people witnessed widespread poverty for the first time. There were those who learned that they had a knack for organizing and activism with smaller local organizations, and were looking for ways to use those skills working with an international agency with a bit more clout and effectiveness. And there were folks inspired by the deeds of other people in their lives–family members, co-workers, or community leaders.

When it came time to tell my story, I realized that I might be the only one inspired by a Rock & Roll Hall of Famer. But then again Joe Strummer isn’t just any singer. Growing up, a good portion of my ideas and theories about things like social repression and geopolitics were influenced and informed by his lyrics.

I told Strummer this when I finally met him in 2002, after a performance by his post-Clash band, The Mescaleros, in Times Square. Strummer was known for being accessible to his fans, so I felt comfortable enough to stroll up to him and introduce myself.

He seemed pleased, but not surprised, to have made such an impression. And then he said something that had an incredible impact on me.

“You know, you and me, we lead very lucky lives. You live in New York, I’m from London. We can both open our windows, and shout anything we want out into the world, and a thousand people will hear us,” he said. “That’s a luxury that we should take seriously. There are so many people who don’t have that voice, or that audience, so the right thing to do is to speak out on their behalf.”

Ever since then, I’ve tried to take his advice. My job at Oxfam allows me to interact with music artists to amplify Oxfam’s message and bring our work on poverty and injustice to a wider audience. We often say that “we believe music can change the world.” In the spirit of Joe Strummer, I like to think that’s what I’m trying to do each day–use music as a means for change, while always looking for ways to shout through that window.

So what about you? What was your “epiphany moment”–rock n roll related or otherwise?