I’m sitting at my sewing machine studying the cloth I bought from a street vendor in Democratic Republic of Congo during a recent field visit. “Superwax Deluxe Original,” reads the label stuck with a thick layer of glue onto the fabric, “5.49 metres.”

That’s a lot of material, and it’s giving me a lot of choices. A dress? A skirt? Curtains? Pillow covers? Half circles, like mustard-colored suns, march across the yardage, one on top of the other. But for some reason, I can’t bring myself to cut into them. Not yet.

I think about the hundreds of women I saw on International Women’s Day in Bukavu, streaming by our car as we sat stalled in traffic. It was a day in their honor, a day for donning new gowns, wraps, and skirts exploding with colors and patterns. It was a kaleidoscopic show, a celebration of exuberance–and it was over too soon. The next day, the women would return to lives of hard physical labor hauling water, tending to their crops, shepherding children, collecting firewood, cooking, washing—the list goes on.

I think about the dress an Oxfam colleague slips into before heading off to the field, a dress made from that joyous women’s day cloth. It fans out at the elbows in great arcs of color and tucks in again to hug the hips. I admire her daring. I want a dress like that, a dress that reminds me of where I’ve been and the women I’ve met, a dress that dances with mustard suns.

But still I can’t cut into my fabric.

I think about the man I met at Mugunga Camp outside of Goma, a place where thousands of displaced people are living in tiny shelters of thatch and plastic. He is sitting on the ground hunched over an old sewing machine. It looks a lot like mine—black enamel with a lumbering fly wheel and a zipper foot that drops with a clunk—but it’s chipped down to the metal and rests in a battered box balanced on two chunks of volcanic rock. 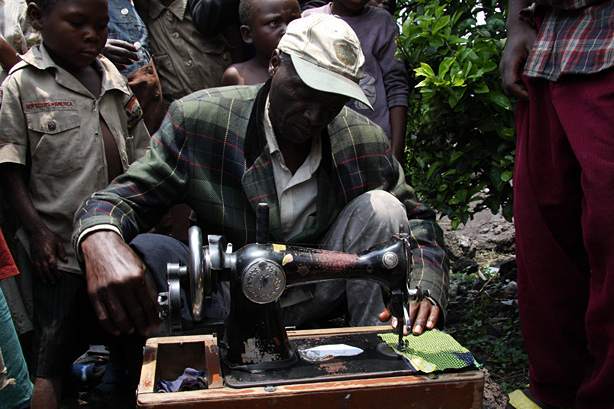 It’s not his machine. It belongs to a relative from Goma; it’s on loan to allow this man the means of making a little bit of money while his life remains horribly interrupted by the years of conflict that have roiled Congo’s eastern provinces. He’s a tailor. But in this camp, where so many people have so little, I wonder who can afford his services. Who has anything new?

He struggles to the thread the needle, and then slips a patch of green cloth beneath it. Ka-chunk. Ka-chunk. The needle plunges through the scrap, nicking at the metal plate below as the tailor cranks the wheel by hand.

My machine has a foot pedal wired to a stream of electricity that spins the wheel. I can flick a switch and a tiny bulb lights up—making it easy to see the eye of the needle, thread it, and stretch my sewing hours late into the night. And I do. I’m making a summer dress with blue stripes. It’s a test: if the pattern works out maybe I’ll use it on the Congo cloth. But maybe I won’t. I don’t know that I can bear to snip those many suns, rising one on top of another, into pieces. And besides, with a closet full of other choices, maybe one new dress is enough.