Karey Kenst is a program associate working with Oxfam America’s disaster risk reduction initiative. She recently returned from a trip to Cambodia. Here are some of her impressions.

As our car barreled down the road from Phnom Penh toward our northern destination of Battambang province, I couldn’t resist snapping photos of the Cambodian landscape and everyday scenes passing by. Palm trees standing tall against the wide sky, vendors selling liters of gasoline from roadside stalls, heat waves rising from the road behind us. Along the way we passed crews cautiously searching for unexploded land mines, a present-day danger left behind from decades of war.

Hours later, my colleague, Latif, and I snaked our way along the curving roads of Battambang town to the office of Oxfam’s partner, Save the Earth Cambodia, who would accompany us to two communities in Koh Krohlor district the following day. Oxfam America and Save the Earth are working together on an innovative program to help protect people from the damaging impacts of recurring drought and floods. We call this work disaster risk reduction, and it is an important part of our humanitarian response and development efforts. 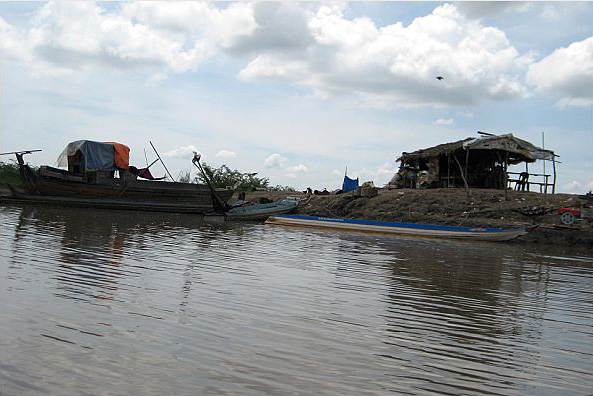 While we visited the communities in Koh Krohlor, calamity was unfolding elsewhere in East Asia as Cyclone Nargis made its way toward the Irrawaddy Delta of Myanmar. Days later the region suffered yet another major emergency when a massive earthquake rocked Sichuan province in China. And as the rains began to fall early in parts of Cambodia this year, I saw firsthand that even small scale disasters have the potential to push people deep into poverty. At every turn during my three short weeks in Cambodia, I was reminded of the importance of helping people find ways to reduce their chances of getting snared in a disaster.

In areas like Koh Krohlor that experience drought and flooding, poverty alleviation and sustainable development depend on addressing the causes behind people’s vulnerability to disasters. Save the Earth showed us how they have begun to do this.

In a workshop led by Save the Earth, community members and leaders, provincial authorities, district governors, teachers, and volunteers came together to identify communities in the area that are most vulnerable to disasters. They discussed the level of poverty in each community, areas where there is a history of severe drought or flooding, and how communities have recovered from disasters in the past. One volunteer showed us the community maps that the workshop participants drew to show where homes and community structures like schools are located and to visually depict which areas are affected by drought, floods, and other potential disasters. They used these maps to compare the different villages and to determine where there is the greatest likelihood of a disaster.

Communities in Koh Krohlor identified drought as the most pressing concern and developed a plan of action for reducing their risks. Some of the activities include raising awareness on how to safely store and use rain water for drinking, as well as how to recycle wash water for use on crops. Ninety-five percent of families in Koh Krohlor depend on farming, so Save the Earth also worked with the Department of Agriculture to provide farmers with detailed information on fast-growing crops. Plants such as marigolds and long beans that can be harvested in a short period of time help families avert losses due to drought or flash flooding.

Oxfam, Save the Earth, and the communities we work with all want to ensure that these disaster risk reduction efforts make a lasting difference in people’s lives. One way to do that is by including the activities in the communities’ long-term plans for development. Each commune, or cluster of villages, has a five-year development plan that commune leaders and community members implement with funding from the national government. These plans consider such things as repairing roads and other infrastructure but often fail to include actions that could help protect people from disasters. By including these activities in their long-term plans, communities can use a portion of the development funds for disaster risk reduction. They stand a better chance of coping with recurrent drought and are far less likely to experience a full-blown disaster.