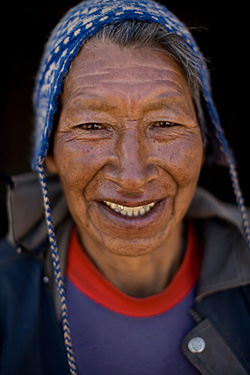 It was near some mountain-side fields in Cusco, Peru, that I met Zenon Pumallica Coyori. When I look at his photo–above, another one taken by Evan Abramson–I see a modern descendent of the ancient Inca Empire.

It is a face of great experience. Coyori says he does not really know how old he is, but is willing to estimate 64 years. He was orphaned when he was young, so he says, “I copied the birth day of a friend who was the same size as me.”

Coyori says surviving as a farmer in the highlands is not easy, but the indigenous people have developed ways of working and living that make it possible. The only problem is that many are no longer using their traditional practices, because they have been made to feel inferior and therefore neglect their culture. So Coyori is working with Oxfam’s partner in Cusco, Peru, the Centro “Bartolome de las Casas” (CBC) to change that. Here are some of the lessons he shares:

Memory: Coyori says that people’s awareness of themselves and their place in Quechua culture affects “our ability to plan, and put our lives in order. We have to transmit our knowledge to each other and understand the past to understand the present and the future.” Participants in CBC’s program must develop their own life story, so they understand who they are and where they come from.

Live Well: “Our families and children must be corrected when they make a mistake. We see a lot of infidelity now, married people having relations with others, and children are abandoned. This brings conflict and violence, and a bad life. It is not a correct way of living, and the children learn these things and reproduce the behavior themselves.”

Work Well: Coyori encourages a strong work ethic: “And we don’t work just to work, we honor the gods of the mountains, our apus, and before we start our work we give them gifts of coca, sweets, cigarettes, cloth, corn, flowers…” Part of the CBC project is to encourage communities to re-awaken the ancient Quechua values of ayni and minka, forms of reciprocity, so farmers can help one another with their work and collective community improvement projects.

Coyori is enthusiastic about sharing knowledge with young people, and he seized on the opportunity to work with CBC in order to learn to read and write Quechua.  But he also wants young people to understand their rights and have pride in their culture because when he was a teenager in the 50s he experienced racism and discrimination.

“I was an orphan and I lived on a hacienda. One week a month I had to work for free as an obligation because I lived on the landlord’s land. I cleaned out pig pens and was fed rotten potatoes, food for a dog… I thought, ‘this is not a life…is it possible some day we will have rights?’”

Ligia Alencastre, a program officer at CBC, says the project will build new leadership skills in young people. “We want them to have self-esteem, and demand respect for their rights, be an owner of his or her culture, help the community value itself, and walk with pride when they go out of their community,” said Alencastre.