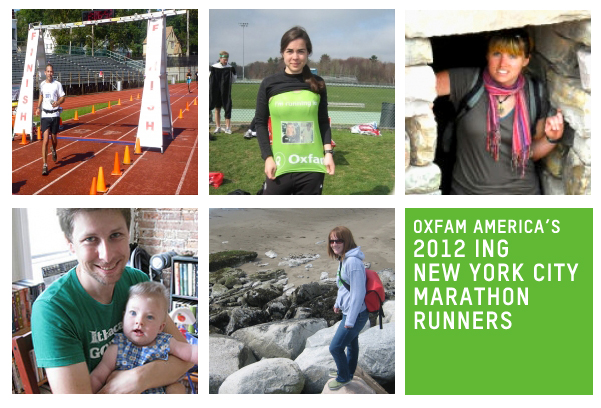 Would you run 26.2 miles to fight hunger and poverty? Several Oxfam America supporters will be doing just that in the upcoming 2012 ING New York City Marathon. In the first part of our interview with the team, they share their reasons for taking on the challenge, plus a few unexpected perks of marathon training.

Tara Weir, Prince George, BC, Canada: I have always wanted to run a marathon—the New York City marathon in particular. My parents ran it three times in the early ‘90s and called it an “unforgettable experience.” I thought that running for a charity would make it that much more of fulfilling experience. Oxfam is a wonderful organization and I am proud to be a part of its team.

James Hare, Brooklyn, NY: Global poverty is the most persistent and urgent problem facing the world today. I joined Oxfam’s team to support their efforts to end poverty and create a more just world.

Andrea Henning, Minneapolis, MN: Fighting global poverty is a cause that has always been near and dear to my heart, and the New York City marathon was high on my bucket list of races to run during my lifetime. So, when I learned that Oxfam was pulling together a team, I thought that joining would be a great way to raise funds and awareness for an organization that shares my commitment to fighting poverty, hunger, and social injustice while fulfilling a long-time dream of mine.

Why do you want to raise funds for Oxfam?

David Klur, New York, NY: To help a worthy cause. Oxfam is doing some amazing work to fight poverty but there’s so much more work to do. Every extra bit helps!

James Hare: I like that Oxfam emphasizes justice rather than pity. This is not about feeling sorry for people but about recognizing that poverty is to a large degree about exploitation and exclusion.

Clara Herrero, Boston, MA: Even though I’m an employee at Oxfam America, it’s more than just a job for me. The day after I graduated I was working full time for the organization and that was about seven years ago. … One thing I really respect about Oxfam and that is so unique is that it’s an organization intent on doing things right even if the process is difficult and long. It’s an organization that doesn’t take shortcuts.

Elenne Song, Chicago, IL: I love Oxfam’s grassroots work and dedication to assisting indigenous people [as they] learn how to build and sustain their own infrastructure.

What’s the best part of training for a marathon?

Andrea Henning: The time it allows me to spend outside and unplug a bit.

Tara Weir: The runner’s high, increasing my long runs and all the delicious carbs I can eat.

David Klur: Finishing my morning run at 6:30am, and seeing others just starting theirs. I didn’t think I was a morning person, but it’s amazing what you can learn about yourself by waking up at 5:15am each morning!

Read the rest of the interview.

Find out how you can support Oxfam’s 2012 ING New York City Marathon team.