According to the Brooklyn Bowl, where he hosts a regular DJ night, Ahmir “Questlove” Thompson of the Roots has a mind-blowing 50,000 records in his collection, in genres ranging from hip-hop to ‘80s to house. I don’t know how many of those he’ll be spinning at the Bowl tonight, but I do know that whatever he plays, the newly named Coolest Person of 2013 will be supporting a very good cause. All proceeds from Questlove’s Very Special Bowl Train with Reggie Watts will go to Oxfam America’s typhoon relief and recovery effort in the Philippines.

“Seeing the footage of the devastation from Typhoon Haiyan on the news, and thinking about all the people…especially the children…who lost so much convinced me to do something to help,” said Questlove, who also started a personal fundraising page to generate support for the relief effort. “Oxfam America does incredible water, sanitation, and hygiene work in these situations, so I’m pleased to partner with them to help keep people there healthy and get back on their feet.” 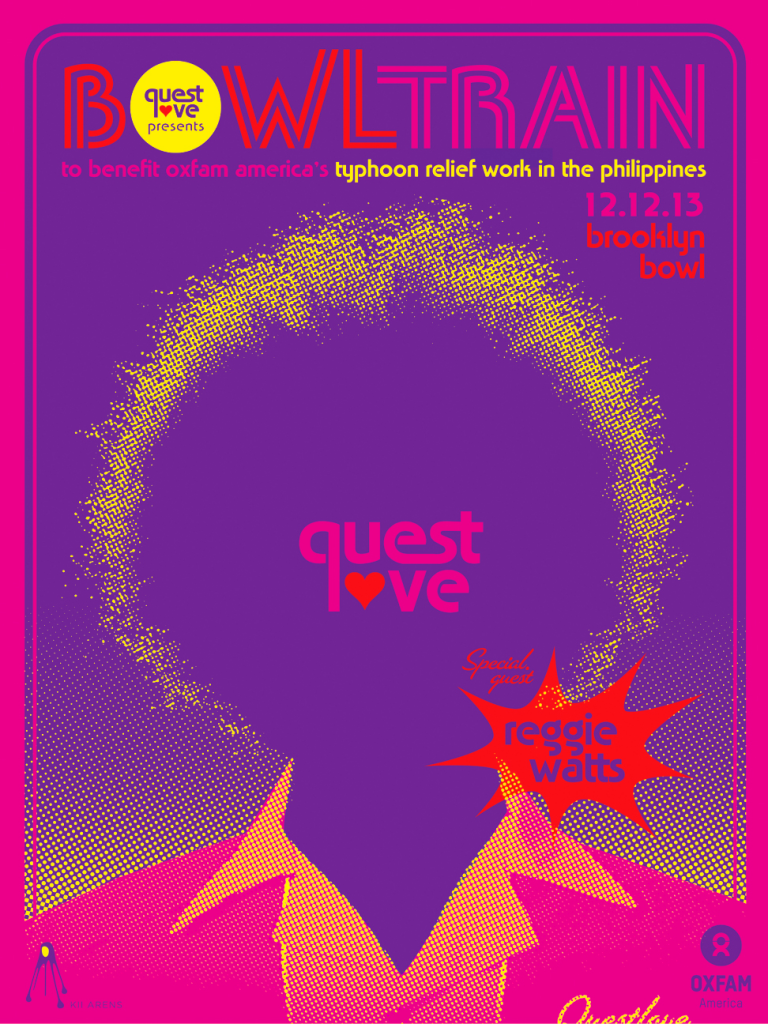 Artist Kii Arens created the custom poster for the event, above, using day-glow ink. Arens is best known for his stunning concert posters for The Hollywood Bowl and other iconic LA venues, and he’s no stranger to supporting Oxfam: he also created the poster for the Radiohead for Haiti benefit concert in 2010.

Questlove and Arens aren’t the only ones in the music industry who have added their voices to Oxfam’s relief and recovery efforts in the Philippines. Artists like Robert Plant, Ra Ra Riot, Ben Sollee, Fitz & the Tantrums, Yoko Ono, Thao & the Get Down Stay Down, and Dispatch—to name just a few—tweeted their support for Oxfam, spreading the word to millions of followers. The great up-and-coming band Lucius donated a portion of their concert proceeds in Boston to typhoon relief. Elvis Costello added his signature to a few limited-edition Oxfam posters, which will be auctioned off on eBay to benefit the Philippines. MTV even selected Oxfam as one of the top ways to help typhoon survivors in the aftermath of the storm.

And of course, none of these efforts would be possible without people like you—the music fans and supporters who are raising funds, spreading the word, and joining your favorite artists in what Flavorpill rightly calls an “awe-inspiring display of kindness.”  To say thank you and share our love of music, we’ve put together a playlist on Spotify featuring some of our favorite songs of 2013, including tracks by Questlove, Lucius, and many other great artists. Listen and share below.