The news from the Haiti earthquake is always staggering.

With the loss of life, the lack of medical care, the collapse of the center of government, the airport that can’t keep pace with the needs, the ruined roads, the non-existent communications system, and the desperate lack of fuel,  the pain and worry that survivors are experiencing is almost impossible to imagine.

Facts and figures tell a piece of the story, but I find Haiti’s reality sometimes hits home through the casual remarks of my colleagues.

Like when my buddy Coco McCabe writes me a message from Port-au-Prince. It starts out sounding kind of normal: “I’m sitting in a meeting, ” she writes, before veering off into a scene from a bad dream. “It was just suggested that we hold meetings outside in future because we are a lot of people and if there’s a big hit, we’ll suffer a lot of casualties.”  In my world, staff meetings and sudden death don’t exist side by side, but in hers today in Haiti, they clearly do.

“There seems to be plenty of food on the streets,” she continues. That is wonderful to hear, until she points out that there is no cash anywhere to buy it with. “Banks are mostly shut down, and people can’t get to their money.” 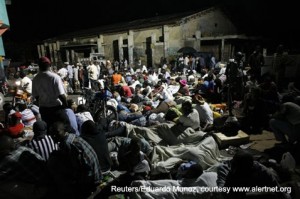 Louis Belanger of Oxfam Canada has been on the ground in Haiti for a week, and he has lots of good news in his daily podcast:

“We had a good day today …We delivered a lot of water. We were active in three main sites across Port-au-Prince. Two of them were in Petionville and one in Delmas. We delivered probably over 30,000 liters of water to over 3,000 people…

Today was a good example of how we work together…Oxfam Spain delivered the water bladder to store the water, the trucks were provided by Oxfam Quebec, and the engineer that installed the entire system was provided by Oxfam Great Britain. …we had a tough time to start this whole operation, but now it’s well underway.”

Then he, too, veers off into the surreal:

This is our most challenging emergency response in years, and we’re launching it from pup tents? I want to say, “You’re kidding, right?”  But of course he is not joking, and so for the hundredth time today I wish I could do something or say something to bridge the gap between Haiti’s reality and ours, if only to let the staff on the ground know how  much we appreciate them and how loudly we’re cheering them on from the USA.