For years, Oxfam has been working with a broad coalition of organizations to pressure the poultry industry to make changes in the way it treats processing workers.

Today, Tyson Foods is announcing new and expanded commitments to improving conditions and compensation for its poultry processing workers.

In several poultry processing towns, worker centers are a vital hub for workers. In Springdale, Arkansas, where Tyson is headquartered, the Northwest Arkansas Workers’ Justice Center (NWAWJC) provides resources and help for hundreds of poultry workers.

We asked the executive director of NWAWJC, Magaly Licolli, to tell us about the town, the promise in the new agreement with Tyson, and her own story.

When I came to the US from Mexico in 2004, I landed in Springdale. I had been an actor in Mexico, and I studied drama at the University of Arkansas. When I auditioned for jobs, that’s when I felt the sting of racism: people judged me because of my accent and the color of my skin. It wasn’t about my immigration status, it was about racism. That prompted me to get engaged with people in the immigrant community.

It was such a struggle for me to get by here, even with an education and good English, I knew it must be so much harder for people in low-wage jobs. I spent years working with nonprofit organizations that focused on immigrants’ rights.

When some of my family moved from California to Arkansas to work in the poultry industry, I got very involved with poultry workers. Tyson is headquartered in Springdale, and there are many poultry plants around here. Workers come from Latin America and Asia just to work in the industry.

When you hear what it’s really like to work in the poultry plants, you can’t just run away— you really need to do something.

It seems like every poultry worker you meet is injured in some way—some are even disabled by the work. Many of them have carpal tunnel syndrome (CTS), many have asthma or respiratory problems from all the chemicals in the plants. Some are unable to walk because they slip and fall in the plants; now they’re stuck in wheelchairs.

The companies rarely take responsibility for workers when they’re injured, and often fire them because they can’t work anymore. Then they’re struggling to bring food to their families. Most of the workers have families, and if only one parent is working, they’re trying to survive on $20-$25,000 a year. They turn to various organizations for help with food, with their kids.

They live in poor neighborhoods in town, crammed into small houses and apartments.

I became the Executive Director of NWAWJC in 2015 , and the work we do is very important to me. We provide training on a variety of topics for poultry workers. They can learn leadership skills, such as speaking in public, and how to organize people in the plants. They can get OSHA information on health and safety: they learn how to map the plant, how to identify what is dangerous, what kind of protective gear they need, how to determine if they have an injury, how to file a complaint about violations. The workers say they rarely get that type of training in the plants; or it’s very vague.

We want the workers to know they do have a voice, and that it’s important to work collectively; they’re much stronger when they work together. Organizing people to get empowered is a long process, but it’s the only way to go.

I’m hopeful about the new commitments from Tyson, and we really expect they’re honest about it, the workers are really hoping for better conditions, and more breaks. I think the fact that the company has new leadership is an opening to develop a relationship with them to commit to changes. They’re making a new push for sustainability for animals and the environment. It may be a big change from what we used to see, when workers were afraid to come to the center because they thought they’d lose their jobs.

It’s smart of Tyson, too, to create a welcoming environment for workers right now. Poultry companies are worried about losing their workers, but if Tyson comes through, workers will want to stay; and consumers will want to buy their products.

I do think the company wants to change—but we’re also very cautious. The workers know it’s not the end, it’s just the beginning of a long fight. We’re going to keep monitoring what’s going on in the plants, and see how they implement the changes.

In the end, it doesn’t matter how many words the company says. We listen to the workers, and we believe what they say. They’re the ones who tell us what’s really happening inside the plants. We look forward to holding the company accountable.

For more information about the new announcement from Tyson and the full story on the poultry campaign, please refer to this blog.

And please take action! As we welcome this announcement from Tyson, we also ramp up efforts to pressure the other top poultry companies to step up. We’re rallying at Perdue today, and speaking out at the Pilgrim’s annual general meeting tomorrow.

Share on social media and pressure the other companies to keep pace with change! 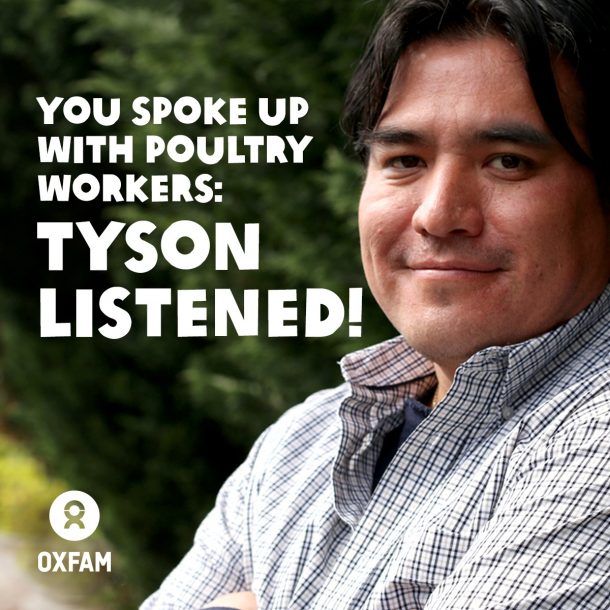