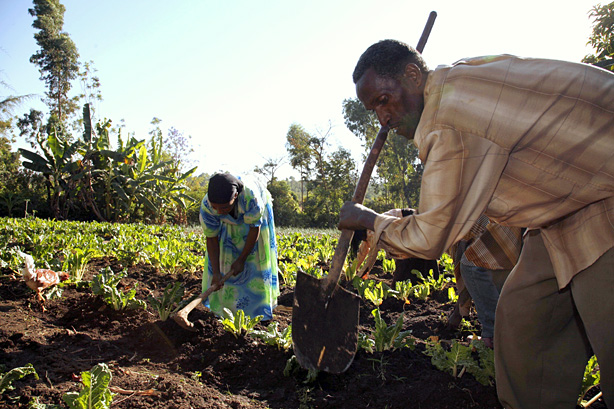 Here’s what’s in our fridge at the moment: red leaf lettuce, carrots, garlic scapes, spinach, broccoli, onions, parsley, basil, turnips, and radishes—all grown at a farm down the road in which we have bought a share. It’s part of a movement called community-supported agriculture. And judging by the waiting list of people who would like to join the initiative in our Massachusetts town, supporting small farms is smart way to get food—whether you live in one of the richest countries in the world or one of the poorest.

But for some reason, that’s a simple lesson governments seem to have forgotten about—at a terrible cost to millions of people who are now struggling in the face of a global food crisis. Hunger and increasing poverty in poor countries are the price for the failure of world governments to invest in small-scale agriculture. There are about 400 million smallholder farmers in developing countries, yet international aid to agriculture dropped by almost half between 1980 and 2005.

Where investments are made, wonders can grow.

Just ask Dedefi Dalacha, a farmer in central Ethiopia. Through an Oxfam-supported program, he now has access to a steady supply of water with which to irrigate a field behind his house. Cabbage, onions, and carrots all grow in enough abundance that he can afford to send all his children to school. He’s shown in the picture above with his wife, Safaye Bediya, in their field. The project is helping 68 households work 61 acres of land. Instead of one harvest a year, farmers now get two.

Want to know more about how to solve the global food crisis? Click here.