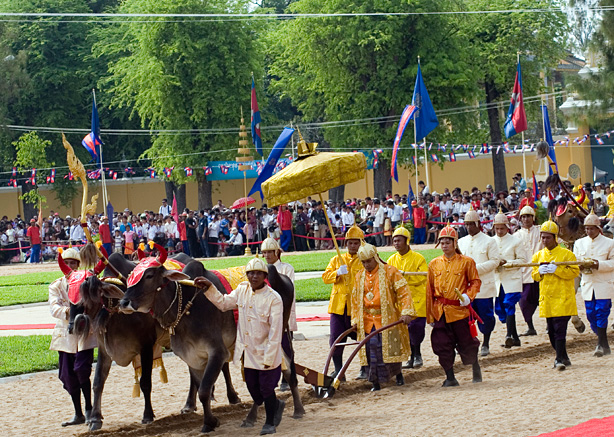 Katie Taft is the regional communications officer for Oxfam America in its East Asia office in Phnom Penh. Here is her account about one way to predict the size of a harvest.

Groundhog Day is the one holiday when Americans put their faith into a small furry creature to tell them if winter will last six more weeks, or if they will finally see the sunshine melt the snow away. But we all know that it is only a bit of superstitious fun.

I am thinking of this holiday as I push my way through throngs of schoolchildren waving small Cambodian flags and holding plastic flowers to cheer on the sacred cows that are making their way a second time around the Royal Palace lawn.

This is the Royal Ploughing Ceremony. It marks the start of the planting season in Cambodia. After circling the palace lawn three times –- possibly working up a hunger –- the cows are led to seven dishes which each contain something different: rice, corn, beans, sesame, grass, water, or alcohol. Depending on what and how much the cows eat during this ancient ceremony, their consumption predicts which crops will have the best harvest.

As I watch the cows get hitched to fancy, gold-embossed plows, I am thinking that Americans aren’t the only ones to rest their futures on an animal’s actions.

As the cows approach the food a hush falls over the crowd. Several old women place their palms together and begin moving their mouths in silent prayer. The silence is loud. To the Cambodians this is no light affair. Even when one of the cows breaks loose from its handler, there is no snickering.

I wonder if this year people are taking the ceremony more seriously. In the past six months good-grade rice — Cambodia’s staple food — has nearly doubled in price and all over Phnom Penh people are talking about it.

I ask the old woman standing next to me what she is thinking and she that sacred cows are about to tell her if she will be able to deal with the price increase.

“I pray that the cows go to the rice because it will be good for my fields,” she says. “Everything becomes more expensive. I need that rice.”

I am dripping with sweat in the glaring 8 a.m. sun and thinking about the work that Oxfam America already is doing to help people grow more food. As I watch King Norodom Sihamoni of Cambodia make his royal gesture to the sacred cows, I am thinking that maybe the whole food price issue is only a hyped media story and will blow over in a few months. While I listen to the Buddhist monks chant for the cows over a load speaker, I am thinking that it has yet to be seen what the impact of this type of price increase will have on Cambodia. As the beautiful women dance and throw flowers in front of the cows, I am thinking that one thing is certain: If the food price issue isn’t media hype it will be the poor who are hit the hardest by it.

Minutes later, Cambodia’s royal cows predict the country will have quite a good rice harvest in six months time. Next the cows eat some corn and beans, indicating those too will have good yields. The cows do not go anywhere near the alcohol, which I think is a good sign. But the cows do not drink any water, which according to the tradition means drought ahead.

A week after the prediction, Ethiopia announces that because of a drought hitting parts of the country, 4.6 million of its people—up from 2.2 million earlier this year—now need emergency assistance and 75,000 of the children there are suffering from acute malnutrition.

In the wake of the news reports about Ethiopia, I am left thinking that maybe a holiday where animals make predictions for us has a higher purpose than just a bit of fun or some pomp and circumstance. Like Americans putting their faith into a small animal to bring them sunshine, the Cambodians put their faith into two large animals to bring them food. Maybe it is meant to build the spirits and confidence of the people to move forward with their lives no matter what challenges lie ahead. And that is not such a bad thing when faced with a possible shortage of food.

So I am hoping that the cows know more than I think. Cambodia is counting on it. After all, they did pick the rice over the alcohol.