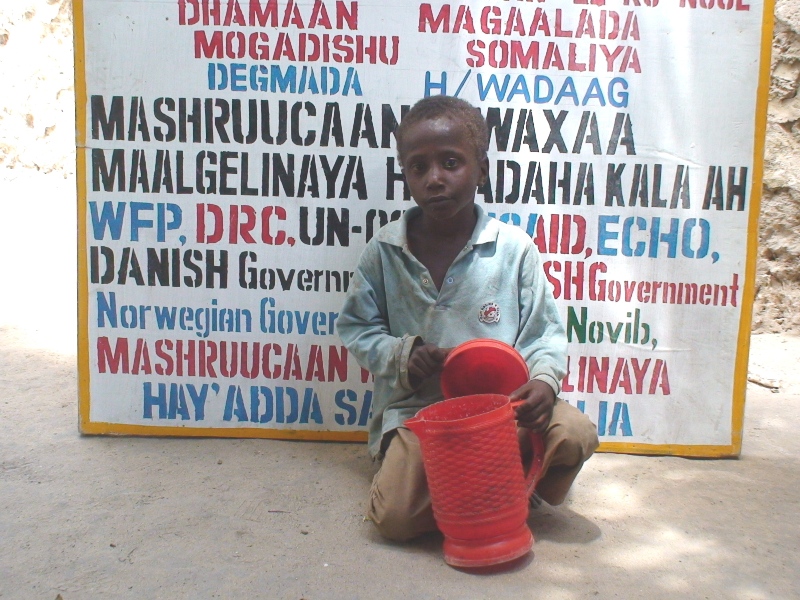 We’re not saints here at Oxfam. With all the bad news about piracy off the coast of Somalia, we’ve been cracking plenty of jokes–most of them corny–about doubloons, parrots, and eye patches. Maybe it’s just a way of managing the horror behind the headlines. They highlight the pirates’ daring, their urge for revenge, their growing sophistication. But behind all that is another story–one that is far more unsettling.

It’s the story of Somalia–a chaotic, lawless place–where one out of every six children is acutely malnourished, where prices for locally grown cereal and imported food have soared nearly 340 percent higher than average, and four years of failed or reduced rains have deepened a severe drought. More than 3 million people–about 43 percent of the population–need emergency assistance.

Among them is Dau’d Omar (pictured above), a young boy Oxfam’s partners have come to know. He’s 8 and lives in the country’s bullet-riddled capital of Mogadishu where his mother works as a porter in the Bakara market. His two sisters also go to the market to beg, and his brother was a shoeshine boy–until a car ran into him. While he was recovering in the hospital, a mortar shell hit the building and killed him.

In November, 2007, when Oxfam opened a hot meal program in Mogadishu that has been feeding 60,000 people a day, a security guard found Dau’d near one of the sites. He had dragged himself two kilometers from his home, but was so malnourished that he was too weak to walk the rest of the distance to the site. The guard had to help him.

Dau’d has now grown stronger. He’s been able to carry his family’s daily two-scoop allocation home, and recently  a hot-meal kitchen opened closer to where they live. The kitchens have saved their lives, he said.

But reaching others like Dau’d and his family is difficult because of the extreme insecurity in the country. Human Rights Watch has said that Somalia is the most dangerous place in the world for aid workers, who have become direct targets of violence. The United Nations has said that Somalis could face total destitution if a solution to the country’s humanitarian crisis is not found.

That solution isn’t going to be found by chasing pirates across the Gulf of Aden. The solutions have to go as deep as the problems, and the problems–poverty, insecurity, impunity–have been mounting since 1991 when Somalia’s government collapsed.