As roads, seaports, and air strips begin to open in the typhoon-ravaged Philippines, access to families and communities is improving. But concerns about public health continue to mount. With the death toll from the storm still uncertain, aid workers are warning that more people could die because of lack of sanitation and polluted flood waters.

There is an urgent need for safe drinking water and medical assistance, especially in Leyte and Samar—two of the three provinces in which Oxfam teams are now working. In the first phase of our emergency response, we’re aiming to support 20,000 families with clean water, latrines, and hygiene essentials like soap—all essential in fighting outbreaks of disease, like cholera, which can kill quickly.  And we will help them get access to food and other necessities.

Photographer Jire Carreon accompanied Oxfam staffers as they continued with their assessments. Through his images, above and below, you get a sense of the massive destruction left in the wake of the storm and of the challenges in meeting people’s emergency needs.

While carrying out assessments, one Oxfam team reached a village in eastern Samar that had not had access to clean drinking water for the last two days. Team members pooled their money to buy water for some of the villagers. 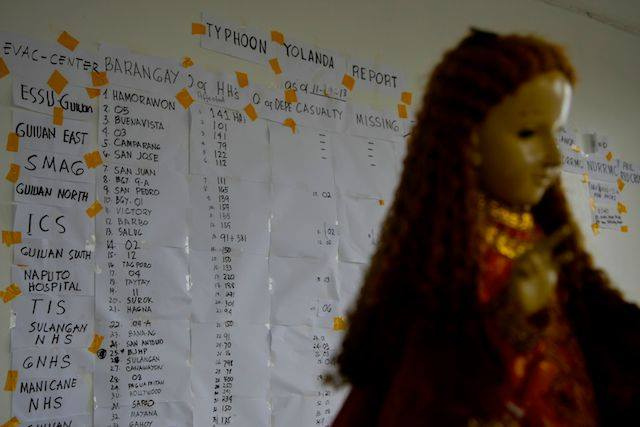 Oxfam’s assessment teams collect vital data on how the typhoon has affected households, including the numbers of casualties and missing people.

With electricity and communications still out in the area, an Oxfam staffer used a satellite phone to send an update on the conditions in Samar.

A woman in Samar  picks her way through the debris scattered by Typhoon Haiyan.

Help Oxfam scale up our response: Donate to the Typhoon Haiyan Relief and Recovery Fund.