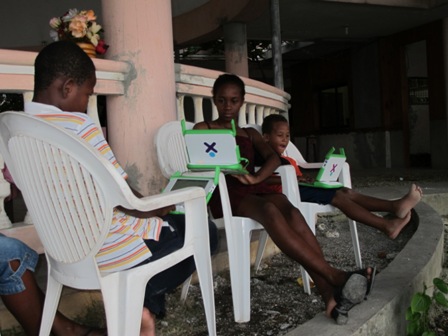 Students in Petite Riviere de Nippes, Haiti, are participating in a program that provides them with laptops.

Read Part I of this blog.

In my mind’s eye, I’ve been seeing the stern expression of Marie Camel Rubin as she posed for a picture, and the serious look on the face of her son, Noel Jolins, standing close to her, his fate sealed in the field they were weeding.

I was in Haiti, in Nippes, and we had just met the pair in a field of manioc, corn, and beans—a place Noel , 8, was spending a good portion of his time since having to leave school because his mother did not have enough money to send him.

I thought about them when we pulled into a hotel in Petite Riviere de Nippes that evening and there, hunched in their chairs, was a small crowd of school children each with their own sturdy green and white laptop. They had come to the hotel to borrow its electricity—kindly offered by hotel owner Emmanuel Pressoir—and his wireless connection. Their town has neither. They looked up just briefly, and smiled in a distracted way when I asked if I could snap their picture, before getting lost again in their on-screen projects.

It turns out that the computers are part of an initiative their school—Complexe Education St. Antoine et St. Augustin, just down the road—launched last year as a pilot, expanded this year with 50 more computers, and will grow again in the summer when 200 additional laptops arrive. The machines are part of the One Laptop per Child program founded by MIT professor Nicholas Negroponte.

Pressoir plays a role in the American Haitian Foundation which helps to fund the school, where he also serves as treasurer. Painted bright pink, the school has about 900 students in grades one through 12—and offers each of them a meal every day, no small gesture in a country where many people struggle to feed their families.
For Pressoir, feeding minds is essential, too. And that’s why he’s happy to let the kids come to his salt-splashed rotunda by the sea, plug into the rusty outlets, and dive into their laptops.

“It’s not only looking on the Internet,” he says. “It’s developing their minds.”

That ‘s a mantra that all of Haiti could use.