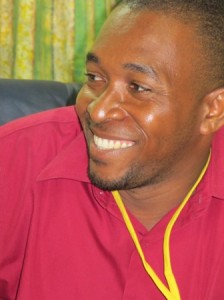 Oxfam America’s Coco McCabe is in Haiti this week, where she’s reporting on the latest from the rebuilding process in the wake of January’s devastating earthquake.

The talk this morning, when we arrived at the Oxfam office in Haiti’s capital, was all about the aftershock that jerked people awake in their beds around midnight last night. Did you feel it, they asked each other?

Some did. And at least one couldn’t get back to sleep for hours.

And again this afternoon, another hit, sending some people scampering outside for safety.

In a city that is slowly coming back to life, I had forgotten the fear these aftershocks can trigger, a fear fed by the unpredictable: Could the January 12 earthquake that killed so many people in Port-au-Prince  and caused such massive destruction happen again?

Driving through neighborhoods jammed with cars, school kids, and sidewalk merchants, you get the feeling that people are trying hard to move on. They’re trying to put that terrible time behind them, even as many go “home” at night to temporary camps and shelters made from sheets of plastic, even as heaps of pulverized concrete—all that’s left of office buildings and homes–spill onto the roads, even as people know parts of their old lives may be gone for good.

“Everyone is kind of going back to normal,” says Djenane Gaspard, who returned to Haiti from Canada two months ago to help her parents, and landed a job in logistics at Oxfam Quebec. But that normal has an edge: When will the real reconstruction start? When will new houses go up? When will the city begin to rebuild itself? Those are the questions, says Gaspard, that hang in the air, as heavy as the humidity before a late-afternoon storm.

That storm never came this afternoon, even though this is the rainy season. Was its absence the sign of another looming change Haitians must grapple with?

“With climate change we are observing the rainy season is [changing] from 10 years ago, 20 years ago,” says Antoine Ladouceur, who works on a food security program for Oxfam Quebec. In some rural areas, the rainy season was late last year, he says: It should start in February and continue through April. But last year, no rain fell in February and almost none in March. April and May marked the rainy months and farmers adapted by continuing to plant seeds through the end of May.

But hardship and uncertainty are hardly strangers to Haitians. And even this new kind of pain—the fear an aftershock inflicts on a city of earthquake survivors—can’t sap their drive to live a normal life.

Haiti is a country of hope, says Yvenock Alcide, the director of Oxfam Quebec’s partner organization, Agropresse. In a nation with no safety nets, people are always hoping things will get better, he says.