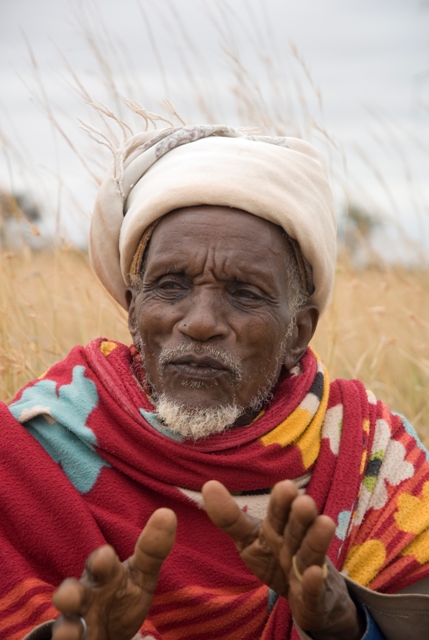 Kotola Buyale worries about what may happen to some of the pastureland in southern Ethiopia now that it has become productive again. Photo by Eva-Lotta Jansson/Oxfam America

In August, I found myself sitting on the damp earth of Dida Liben, a once-flourishing pastureland in southern Ethiopia where animals, both wild and domestic, thrived. Today, it’s mostly hard-packed dirt, pocked with patches of stubby grass and thorny bushes—except where I was perched with a small gathering of local elders.

Around us, the grass had grown tall and thick, the result of an Oxfam-supported conservation effort that had set aside 275 acres of pasture and fenced it off with a bramble enclosure to give the land time to recover. And it had, gloriously—prompting the elders to luxuriate in the feel of the grass swallowing them, as it had when they were children. Even some of the wildlife was coming back—antelopes, rabbits, boars.

But a tinge of fear colored their reminiscences. What if someone were to see how good all of this had become—and take it away? That was the first thing Kotola Buyale, wrapped tight in a red shawl, wanted to talk about as we sank into the tall grasses to get out of the wind. What if?

The elder’s words came back to me—like an omen—when I read a recent story in the New York Times Sunday magazine about how rich countries with limited land suitable for farming are now shopping abroad for places to plant so they can feed their people. And guess where they’re looking ? Ethiopia, where hunger regularly stalks almost eight million people. The story reported that the country’s ministry of agriculture has tagged more than seven million acres as virgin land and plans to lease half of it, very soon, to foreign investors for just 50 cents an acre per year.  It’s part of a trend now sweeping the globe: In May, The Economist reported that in the last three years foreigners had secured deals or engaged in talks on  between 15 million and 20 million hectares of farm land in developing countries.

Surely Ethiopia, one of the poorest places in the world—it’s 171 out of 182 countries on a United Nation’s index that measures national well-being—could benefit from some robust foreign investment. But it must be the kind that helps the government meet its responsibility to ensure people have enough to eat. Is 50-cents-an- acre that kind of a deal? And for people who must certainly be living on those millions of acres—virgin or not—will there be long-term benefits they can count on from these investments? The government – like any government in this situation – should insist on it.

The pressure is on.

And Ethiopians feel it, even as they scramble to find ways to feed themselves. It’s hard not to admire the drive and entrepreneurial spirit of a man like Huka Balambal, a herder in southern Ethiopia who knew he needed to find a different way to provide for his family when repeated droughts shriveled the pasture on which his livestock depended.  First, he taught himself to farm. Then, he devised an entire irrigation system for his small plot near the Dawa River. (Check it out in the video above.) Now, harvests of corn and onions have eased his situation considerably.

That kind of determination can help feed a nation—if the government ensures people have the resources and support they need.