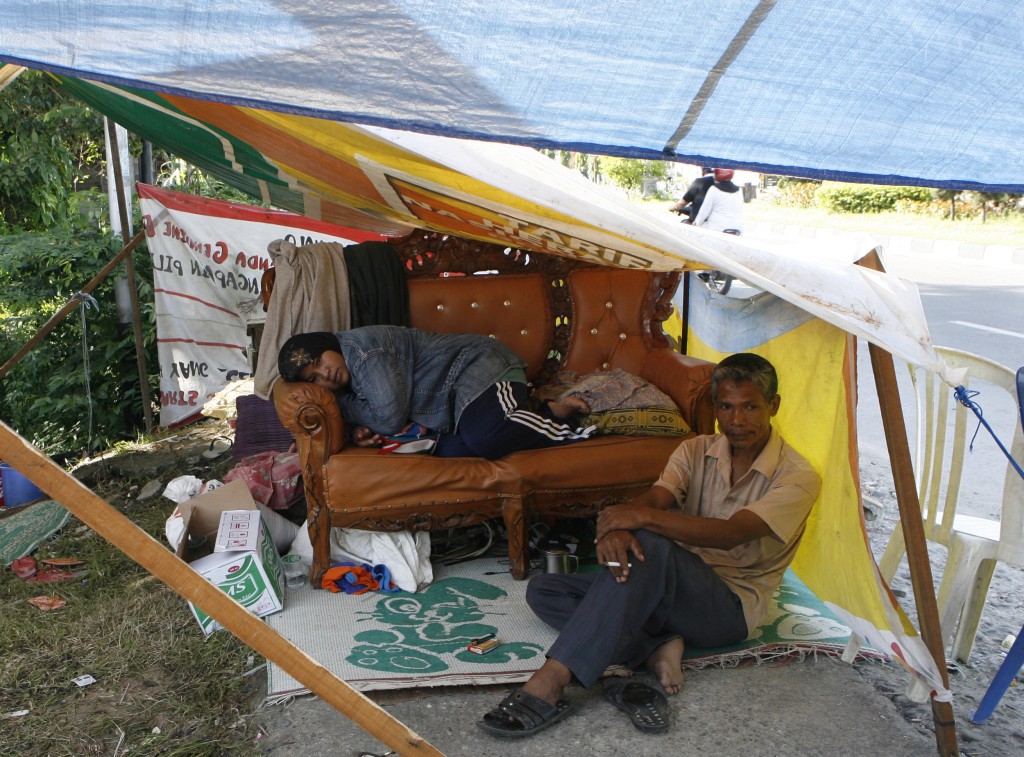 With their house destroyed by quake, residents of Padang have moved to a tent along one of the city streets. Photo by Reuters/Erik de Castro, courtesy www.alertnet.org

The powerful undersea earthquake that struck near West Sumatra on September 30 killed at least 1,000 people and destroyed homes, bridges, and roads in Padang and villages north of the city. Oxfam’s Kate Thwaites describes the complex logistics of providing emergency aid to the Indonesian seaport.

There’s a strange feeling in Padang as the city begins to pick itself up almost a week after the devastating earthquake.

To a visitor like me, parts of the city look almost normal – houses are still standing, traffic seems to be moving again.

But in other parts, where large buildings have collapsed leaving mounds of rubble, it’s clear that things are still far from normal.

Outside the city, in the villages closer to the epicenter of the earthquake, it seems like it will take much longer for things to even start to resemble normal.

Here, the earthquake damaged many houses and mudslides buried others. People have lost family members and friends.

Water sources – mainly wells and rivers – are full of sand and dirt, and so people are struggling to find water that is safe to drink, and use for washing and cooking.

This is the first time I’ve been in the middle of such a big aid effort, and it’s impressive for me to see how quickly Oxfam’s staffers swing into action.

A water tanker has begun carrying clean water, and a water purification system is dispatched to one of the more remote locations hit by the earthquake. Tarpaulins have already been handed out, and are being used by people whose houses have been damaged.

The logistics of all of this are complex and made more difficult by the fact we still don’t have a full picture of all the damage the earthquake caused, particularly in more remote locations. Staff members from Oxfam and other agencies are surviving on very little sleep as they try to get the full picture and make sure help gets to where it’s needed.

The uncertainty of it all is affecting everyone. One of our staff members told me he’d been speaking to people in some more remote villages who were very worried that there would now be another earthquake. It’s difficult to imagine how hard it must be for these people to begin to recover when they are still afraid of more damage being done.

As an Australian, I can’t help but compare the situation to our most recent devastating natural disaster, the Black Saturday bushfires earlier this year. We’ve seen firsthand how hard it is for communities to recover when they’ve lost so much, and how long that process takes. The people of Padang will need our support as they try to begin to get their lives back together.