Emily Farr is a deployable humanitarian officer for Oxfam America. When she’s not busy thinking about issues of economic recovery and livelihoods, you might find her consumed with acquiring a surprising new skill.

Do you remember the earthquake in Peru last August? That was 10 months ago, and by now you might have only a hazy remembrance of the 8.0 quake, especially given the fact that so many other emergencies have since dominated the news—including the devastating quake in southwestern China earlier this month and the deadly cyclone that hit Myanmar.

But the people of Pisco, Peru, think of little else other than the disaster that struck their communities in August. For them, those 10 months have felt like a really, really long time. Not much has changed since the day that earthquake hit and their lives and livelihoods were sent crashing into a heap. After being in Pisco in August, immediately following the earthquake, I went back in March to talk to community members about the progress of their livelihoods recovery. 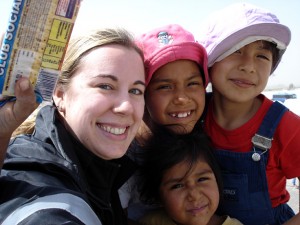 Oxfam has been working with many community groups in Pisco, including representatives of the Afro-Peruvian community, a minority in the area. It turned out that one member of the community, a woman, teaches Afro-Peruvian dance classes and the female staff members in the Oxfam office had jumped on the opportunity to get some exercise. I was invited to attend the class the evening after my arrival, which is why, after a 12-hour day of discussions with community members about the challenges of rebuilding their lives, I found myself sweating away to the sound of two boys pounding on wooden boxes.

The class was held in a studio like none I’ve ever seen: the peeling concrete walls were painted bright pink, the color amplified by fluorescent lights, and the poured concrete floor was crumbling and full of holes. The air was stifling hot and the few windows provided no relief—probably because they were blocked by curious onlookers peering inside. The composition of the class was also a little unusual: about 75 percent energetic young girls and 25 percent adult women. The girls, of course, were much better than any of the adults.

Although the floor made dancing a little challenging, the class was great. I became intimately familiar with new muscles and found new ways of moving. I also discovered an unknown talent for this style of dance—or, at least, the teacher, Rosa, was kind enough to tell me that I was doing well.

The following day was also long, and I had a few sore muscles from the class, but I was still game to try it again the next night. We arrived at the studio only to find it dark and shuttered, so we called Rosa to find out what was happening.

Prior to the earthquake, Rosa had taught dance classes out of her home. Her house was destroyed in the earthquake so she had been renting the studio space. The day we returned for the second class was April 1, though, and she hadn’t been able to put together enough money to rent the studio for the next month. Without the studio there could be no class—which meant no income for her family. Without money, will Rosa lose her livelihood? How will she afford to rebuild her house, much less feed her family?

Although Rosa’s story is different than that of most people I met—who were usually farmers, laborers, or women who raise small animals or run bodegas out of their homes—in a sense it’s also far too common. I heard similar issues echo throughout the Pisco Valley. Money is tight and most people can’t afford to save to construct new houses. It takes a long time to rebuild lives and livelihoods following an emergency, which is why it’s essential for organizations like Oxfam not only to respond to immediate needs but also to help communities build themselves back.