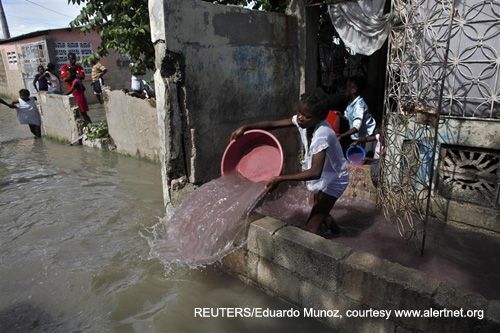 Hurricane Tomas dumped plenty of rain on the displaced residents of Haiti’s capital over the weekend where countless families continue to live in tents and under tarps in crowded camps scattered across the city. They’ve been there since the January 12 earthquake destroyed their homes. As Tomas churned toward Port-au-Prince, fear of another catastrophe ran high.

And there’s no doubt that the preparedness work Oxfam did in advance—including digging drainage ditches, clearing canals, and securing water tanks and latrines—helped keep these critical systems intact.

But there’s lots more work ahead: a cholera epidemic has hit the rice-growing region north of capital. According to the UN’s Office for the Coordination of Humanitarian Affairs, the Haitian government is now reporting that more than 8,000 people have been hospitalized with the virulent waterborne disease and more than 540 people have died from it. Oxfam is very concerned that all the rain Tomas dropped could exacerbate cholera’s spread.

In Artibonite province, where most of the hospitalizations have occurred, Oxfam has launched a major response to combat the outbreak. We have a team of about 25 staffers working in an area called Petite Riviere, with a population of around 100,000. We’ve been distributing water purification tablets and powder, soap, buckets, and oral rehydration salts to about 40,000 people. We’re also carrying out a massive education campaign on how to prevent the spread of the disease. Good hygiene and access to clean drinking water are key.