I got a workout in the Democratic Republic of Congo during a field visit there in March. But not the kind I expected. I got it sitting–or lurching–in the back of four-wheel-drive vehicles as they negotiated what pass for roads in Congo.

They’re mostly terrible–and they’re the first thing you notice when you cross the border from well-paved Rwanda. You get slammed. The vehicle hits swells of volcanic rock pushing up through the mud, and it pitches down into black ruts as it creeps through Goma, the capital of North Kivu province.

You could chalk it up to the conflict that has gripped this region for years, driving away investment and leaving what infrastructure there was in a state of compete neglect. But somehow, I think the problem is deeper even than that. It’s the legcay of decades of poor government. And it’s a function of distance. Kinshasa, the capital of a country that is the size of western Europe and where, at last, a democratically elected president finally sits, is so far away from these war-ravaged eastern provinces that it might as well be on another continent.

For the next three weeks, after crossing the border into Congo, I held on so tight to the edge of my seat to keep from flying off it that at the end of particularly arduous days my arms ached. But at least I had a ride. Most people get about on foot, streaming along the few dirt roads under enormous loads of wood for their fires, water for their households, harvests for market. 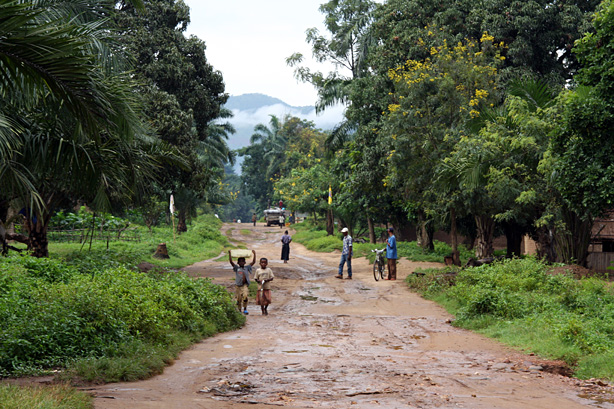 On some days, some roads are not even passable by vehicles. Rain made the mountain road from Bukavu to Uvira too sloppy to risk. So we crossed back into Rwanda where the road was straight and paved, preferring the hassle of repeated border formalities to skidding dangerously through mud.

But on the way back, we took the mountain route, a long orange-red ribbon of road snaking up the ridges above a wildly rushing river. The road was spookily narrow, especially when trucks towering with people and goods lumbered down around the curves toward us. It felt like a game of chicken.

But in Congo, this business about the roads and the limited number of vehicles on them is not a game, not when you’re sick–with cholera, anemia, a pregnancy gone awry–and need medical treatment fast. Not when conflict has reduced you to intolerable poverty and help can’t reach you.

“Sometimes, (pregnant) women die because we can’t get them to a hospital,” says Nyakupita Wabinwa, president of the management committee of the Kabimba health center outside of Uvira. Emergency food supplies have piled up for people in remote parts of the region, adds a UN official in Uvira, but unless there’s enough money to fly it in, they won’t get it because the roads are so poor, or non-existent.

An Oxfam program manager put it this way: “If you want security here, you should put roads first. If you want to improve living conditions for people–roads, security.”