This week, campaigners dressed as the G20 world leaders took to the streets of Pittsburgh, dressed as — who else in that football-loving town — the Pittsburgh Steelers. 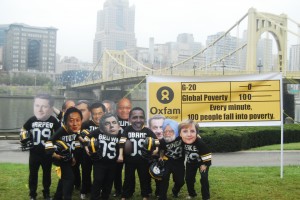 Oxfam asked that the G20 leaders protect poor countries, which have been struggling to respond to the global recession, high food prices, and the impacts of climate change.