Three years ago in Biloxi, Miississippi, Oxfam America made an unusual grant following Hurricane Katrina. We gave Hands On, a group that mobilizes volunteers to undertake cleanup and rebuilding, money to purchase a mini excavator.

FEMA had claimed that it could not deliver desperately needed trailers to those who’d lost their houses until their yards were cleared of debris. Fifty Hands On volunteers were working from dawn until dusk cutting trees and moving rubble to facilitate this.  The addition of the excavator eased their work considerably, speeding the cleanup and denying FEMA an excuse for delays in delivery of the trailers.
In the days following Katrina, Oxfam America worked with Bill Stallworth, the city councilor for East Biloxi, to set up a coordination center that would serve as the focal point of those arriving to help with relief and reconstruction.

Fast forward three years to Hurricane Gustav, which spared Biloxi but slammed into some of the bayous of coastal Louisiana. Outside the fire station in Little Caillou in Terrebonne Parish, my colleague and I were monitoring the distribution of water and ice.   Glancing across the parking lot I saw a trailer with—yes—the excavator from Biloxi. My colleague was unconvinced, but the now- faded Oxfam sticker on the machine confirmed my story. 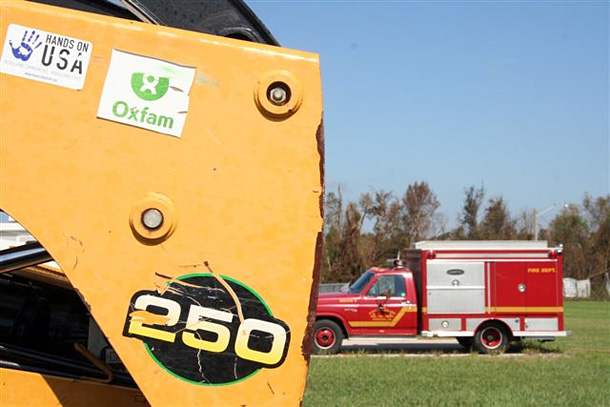 It had arrived in Little Caillou, courtesy of volunteers working with the Hope Coordination Center—the facility Oxfam had helped launch back in Biloxi in 2005. It is now well-established and houses a number of groups involved in the reconstruction of that city. Biloxi had been bracing itself for Gustav. But when it became clear that the storm would spare the cityand hit the coastal areas of Louisiana, the center mobilized a team to help its neighbors to the west.  The team was made up of volunteers from Hope Force and Hands On Gulf Coast, which brought along its excavator.

In addition to cleaning up debris scattered by Gustav, the team is focusing on installing tarps on the damaged roofs of houses. And Oxfam is supporting this endeavor by providing tarps and funds to support the volunteers’ transport and food costs.

It was great to see partners that we’d supported following one disaster not only thriving in their own community, but having grown enough to be able to help those in another state in their time of need.