I started working at Oxfam in late February. It’s been a busy year—we’ve been juggling emergency responses to seemingly endless disasters—and learning the ropes at an international organization on top of that has been no easy task.

And yet, I don’t regret any of it. Witnessing first-hand how we spring into action to provide assistance that saves lives—and also how we stay on to help communities rebuild and become resilient—has been an incredibly fulfilling experience.

Like a true nerd (as any of my friends will tell you), I take great joy in discussing my work. Here are some of the reasons this was a truly remarkable year.

1. We challenged the travel ban

Shortly after President Trump took office, he signed an executive order banning refugees and citizens from Iraq, Syria, Iran, Sudan, Libya, Somalia, and Yemen from entering the United States. Immediately, Oxfam issued a statement condemning his actions. That ban was since overturned, and as new discriminatory guidelines were rolled out over the course of the year, Oxfam continued to fight against the travel ban, pursuing it all the way to the Supreme Court.

As the child of immigrants, I know it is difficult even in the best of circumstances to leave your friends and family behind. I cannot imagine how painful it is to be forced out of your country. Technically, I was still interviewing for my job when Oxfam joined the lawsuit against the executive order, but that commitment to standing up to injustice made me all the more eager to work here.

2. The Famine Food Truck served a dose of reality instead of food 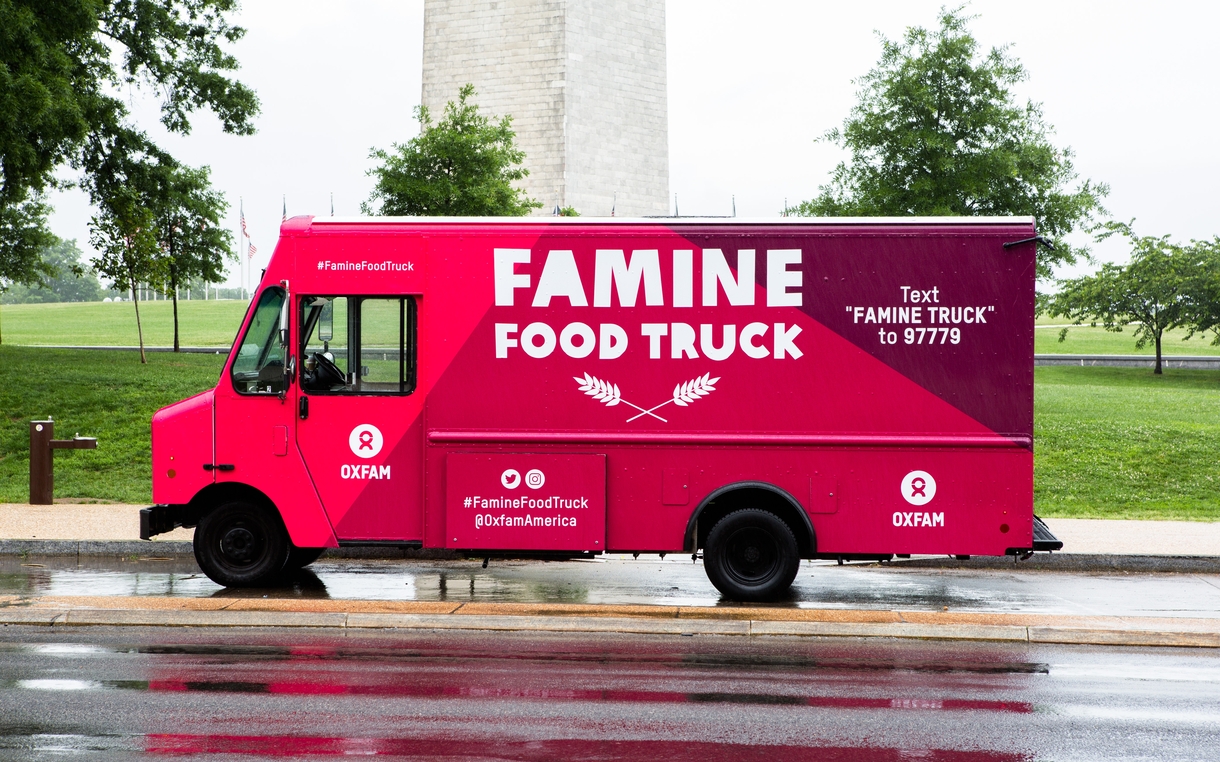 Millions of people in Somalia, Yemen, South Sudan, and Nigeria are struggling with extreme hunger. In February, just as I started at Oxfam, famine was declared in South Sudan. Since then humanitarian aid has helped halt famine, but things are still looking grim.

In May, we took to the streets of Washington, D.C., to spread awareness of this humanitarian crisis and inspire action via an unconventional vehicle—a food truck. There was no food on-board The Famine Food Truck, but for those who craved information, the truck offered a menu of a “healthy budget,” which costs less than 1 percent of the federal budget, and a “Trump budget special,” which came with the warning that it “may cause indigestion.”

3. We took over President Trump’s childhood home to welcome refugees

In September, while world leaders gathered in New York for the United Nation’s General Assembly, Oxfam and a group of resettled refugees had a gathering of our own in President Trump’s childhood home in Queens, New York. Our message was—and is—clear: With more people displaced than ever before, now is the time to extend a welcome mat, not close the door on refugees.

4. We helped our fellow Americans rebuild in Puerto Rico

Hurricane Maria struck Puerto Rico on September 20 and 100 days later, the island is still experiencing an acute crisis, with widespread lack of clean drinking water, electricity, cell networks, and other essentials. It’s heartbreaking that this is happening—and on American soil. When the US government failed to take swift action to aid the residents of Puerto Rico, we decided we could not waste time waiting. We’ve partnered up with the Foundation for Puerto Rico to assist low-income elderly people gain access to food, diapers, and batteries, as well as the Foundation for Access to Justice to help families file their FEMA applications. Most recently, our team has launched distributions of solar lights and water filters in communities that lack access to electricity and clean, safe drinking water.

You can help contribute to Oxfam’s successes. Make your gift by December 31 to receive a charitable tax deduction for 2017.