I recently came across a quote from one of my favorite photographers, Minor White, who said, “At first glance a photograph can inform us. At second glance it can reach us.”

My job is to organize and catalogue Oxfam’s photography from Haiti and other disaster-affected areas. That’s why I wanted to highlight a few recent images from Haiti—all by Ami Vitale—that are worth a second glance.  Six months after the devastating earthquake, they illuminate Haitians’ efforts to rebuild and recover.

In rural Haiti, farmers are learning better beekeeping with the promise that more honey means more income to spend on household necessities. For me, this image from the village of Lacedras comes alive through the light and the points at which it hits.  As the beekeeper angles the honeycomb towards the sun for a better look, the comb glows with a warmth and seems to be lit from within. It suggests the hope and potential for beekeeping to provide greater opportunity for these farmers.

In this photo, 15-year-old Mackenson Pierre cuts down sugar cane outside the town of Saint Michel de l’Attalaye.  The angle of the image brings the viewer directly into the space alongside Pierre. The tall lines of the sugar cane stalks are echoed by Pierre’s outstretched arm and elongated figure, and the light on his face illuminates his expression.  It looks as though he has paused while reaching for another stalk—and in this moment I feel as though I see a bit of his personality.

Boys play soccer in the yard of the Perard home in the town of Saint Michel de l’Attalaye, where 17 people have come to live in the days since the quake. This image is alive with movement and action. The sun shining through the tree leaves casts bits and pieces of light which play off of the movement of the boys’ arms and legs, adding to the fast-paced feeling of the image. Here the viewer becomes a participant in this game; I imagine this still image turning into motion, and the boys whooshing past in deft maneuvers to gain control of the ball. Their expressions suggest concentration, determination—and fun. 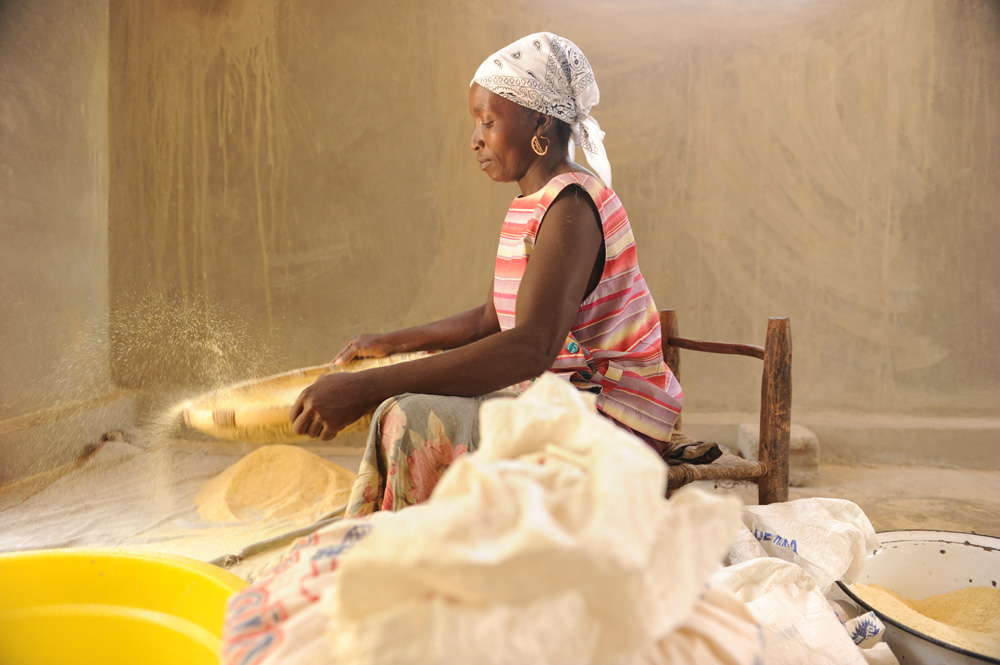 A woman processes flour inside a building that was funded in part by Oxfam in the village of Lacedras. There is an elegance and strength to her posture and a warmth and softness in the textures of her clothing, the walls, and the bags of flour. The tranquility of this scene is interrupted only by the grains of flour, which dance and fly about in tiny explosions, which contrast the woman’s stillness and concentration in her work.