“You’re not going to like what I have to say,” warned the woman next to me. An instructor at a local college, she was among the 80 or so people who’d attended a Boston panel discussion last week in honor of the centennial of International Women’s Day. The panel was one of over 175 events nationwide organized by Oxfam America and our supporters this spring, all based around the theme of women and food.

It wasn’t the response I expected when I asked my neighbor what she thought of the panel. But I assured her I’d listen with an open mind.

She said that it was good to hear women’s stories from other parts of the world—referring to panelist Yvette Cissé, an Oxfam America partner and leader of an organic farmers’ cooperative in Mali. Cissé spoke via translator about the benefits she’s seen from growing organic cotton, such as more fertile soil and higher earnings that help women feed their families. “You can be an expert farmer, but if there’s not enough water, it’s a big problem,” said Cissé of the challenges caused by increasingly erratic rainfall. “Women are pulling water by hand from a 20- to 30-foot-deep well, or walking up to a mile to get water for their gardens.”

Still, the woman next to me explained, she sometimes worried that stories like this might divert our attention from ending hunger and poverty here in the US. Those problems may not be as intense, she said, but they’re real too, and they’re right on our doorstep. 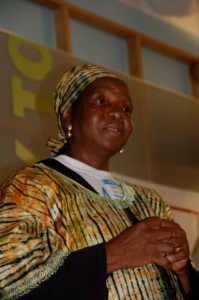 I understood where she was coming from. As a Boston resident, I learned a lot from the two women on the panel who are fighting hunger in my city—one was Boston’s Director of Food Policy, another the head of a bakery and café that provides healthy meals in low-income neighborhoods.

While community gardens and farmers’ markets may be something I take for granted, I realized that they’re actually working toward the same goals as Cissé’s cooperative: healthy food, plentiful food, and equality for everyone to have a place at the table.

And as we try to come up with solutions, we can learn from one another along the way.

In fact, many of the events this spring combine local and global perspectives, bringing organic chefs, food experts, and other leaders together with women farmers from places like Haiti and Cambodia.

The day before yesterday, at an Oxfam America Hunger Banquet event in New York City, Cissé spoke alongside environmental justice advocate (and Sisters on the Planet ambassador) Majora Carter.

“Inequality might look different here in the US than it does in other parts of the world,” said Carter. “We don’t really starve for calories … but we do starve for nutrition here in a big way. And women are often the ones who are picking up that burden.”

I thought of the woman I’d met at the Boston panel, and the look of worry in her eyes. I wished I could tell her that fighting hunger here and tackling it elsewhere aren’t exclusive. Caring about one thing doesn’t mean you don’t care about the other.

What matters, in the end, is simply that you care.