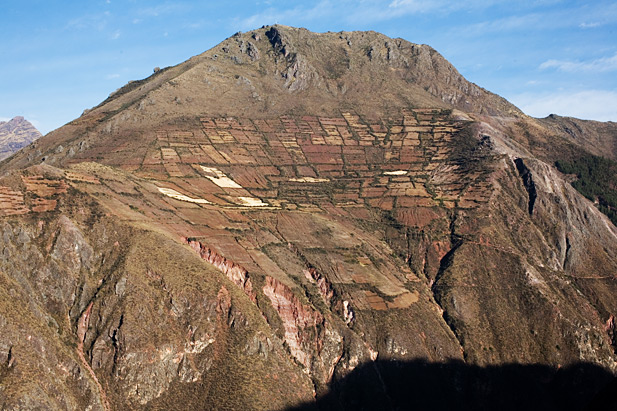 Farmers in the Andes Must Overcome More than the Cold, Thin Air to Survive

For me, working in the Andes has its challenges. Aside from the bad roads in remote areas and the cold, threatening weather, I have a real problem with my head.

I am good up until about 4,000 meters (about 12,000 feet), after that I get some pretty bad headaches. I recently got medication to prevent this altitude sickness.  It held off the headaches, but gives me a tingling sensation in my feet and fingers.

But nothing can take away the sheer beauty of the mountains. The tingling sensation adds to it. The picture here by Evan Abramson captures one scene: it is a group of communal fields on the side of a mountain in Cusco, Peru. One year a family will plant potatoes in one plot, the next another might plant barley. The community then leaves it fallow for five years to restore its fertility, then puts it back in the rotation.

Having grown up at sea level, I could not imagine farming at this altitude. A brisk walk can leave you out of breath and a bit dizzy. But the hard physical labor is just one difficulty: Many Quechua-speaking communities struggle to preserve their way of life in a country that does not respect the languages and culture of indigenous peoples.

“They are dismissed and ignored, in health clinics, schools, banks, in the streets and on buses, and in restaurants,” says Ligia Ligia Alencastre, a program officer at the headquarters of Centro “Bartolome de las Casas” (CBC) in Cusco. She says that pervasive racism and discrimination make many young people shy away from their own culture, purposefully neglecting the traditions and practices that have helped their ancestors survive in this harsh environment.

“It is their survival strategy, their attempt at gaining access to modernity by denying their identity,” says Gonzalo Delgado, Oxfam America’s program director in South America.

The economy of Peru is booming right now, but about half the country lives in poverty and does not share in the economic growth. Most of the poorest people are indigenous people, and I don’t think this is a coincidence. It is a result of racism and discrimination, which over the centuries has succeeded in making people actually think of themselves as inferior to others.

One way of defeating racism is through education, and most importantly, changing the minds of young people. This was the basis of the Black Consciousness movement in South Africa, and a similar idea of self awareness and empowerment is a key part of the work of CBC in Cusco. You can read my story on CBC’s education program here.

The CBC program is helping Quechua-speaking people understand and claim their human rights, and ensure they get the same education, health care, and other social benefits of the modern state that any citizen deserves. But they also need to keep up their farming practices, which requires respect for their indigenous knowledge and traditions, including when and where to plant barley and potatoes that will grow at a high altitude on the side of a great mountain. Read my next post to see how these traditions are being taught and respected.