Help for small-scale farming, and women farmers, is at core of Global Food Security Act.

Jim French is Oxfam’s Senior Advocacy Advisor for Agriculture and raises crops and livestock on his farm in south-central Kansas.

In those seven years, Oxfam America, has worked not only to support the legislation but contributed to the crafting of its core food security principles: investments in agriculture to promote food security and nutrition, empowering small-scale farmers especially women, and partnership with governments and local organizations.

When the final vote count was announced, I thought about the many small farmers I had met and worked with in my years at Oxfam. Their voices and leadership have been crucial in the fight against hunger, poverty, and inequality in the global food system.

I remember Mme. Jacqueline Morette  sharing a stage with US Representative Betty McCollum (D-Minn.) on International Women’s Day in 2011 at the University of Minnesota.  Jacqueline described her work as President of the United Women’s Association of Pouille, a rural area in Haiti’s central plateau region. She told the Congresswoman and audience that if the US would focus aid to Haiti on developing agriculture, the nation could become food secure and thrive.

I also recalled Ms. Susan Godwin , a Female Food Hero from Nigeria receiving a rousing ovation at the World Food Prize. Susan travelled to Des Moines, Iowa from the village of Tunduadabu in the Nasarawa State of central Nigeria. There, she grows groundnuts, cassava, millet, maize and yams. She also mentors other women farmers. She described the challenges she and other face such as changing market demand for products, low prices offered by middlemen buyers, and weak institutional support for smallholder farmers. But she said that with better access to information, markets and tools, women farmers could help feed Nigeria, as well as providing jobs and better livelihoods in their communities.

Finally, I remember a sunny morning in the Malian village of Santankouto accompanied by US farmers from Kansas, Texas, Illinois, Vermont, and Virginia. One of the Malian farmers demonstrated the use of the small hand hoe that the women and men used to cultivate their fields of sorghum, cotton, and millet to Kansas farmer, Charlie Melander.  Charlie later wrote that “together we shared a moment doing something common to both of us — cultivating the soil. In spite of the difference in language, I understood that we shared much more… We wished to do good work, provide for our families, care for the land and make life better for the next generation.”

Many of you reading this have called or written your member of Congress about this legislation, and today’s vote shows that your legislators are influenced by your voice. Please join me in sharing this good news!

Today, I am thankful that I have had the opportunity to travel with and learn from small-holder farmers in developing nations. They have demonstrated over and over that they possess the skills, leadership and drive to help end poverty and hunger. And legislation like the Global Food Security Act can ensure that the women and men farmers of the world can better have that opportunity. Thank you, Congress, for helping move this vision forward. 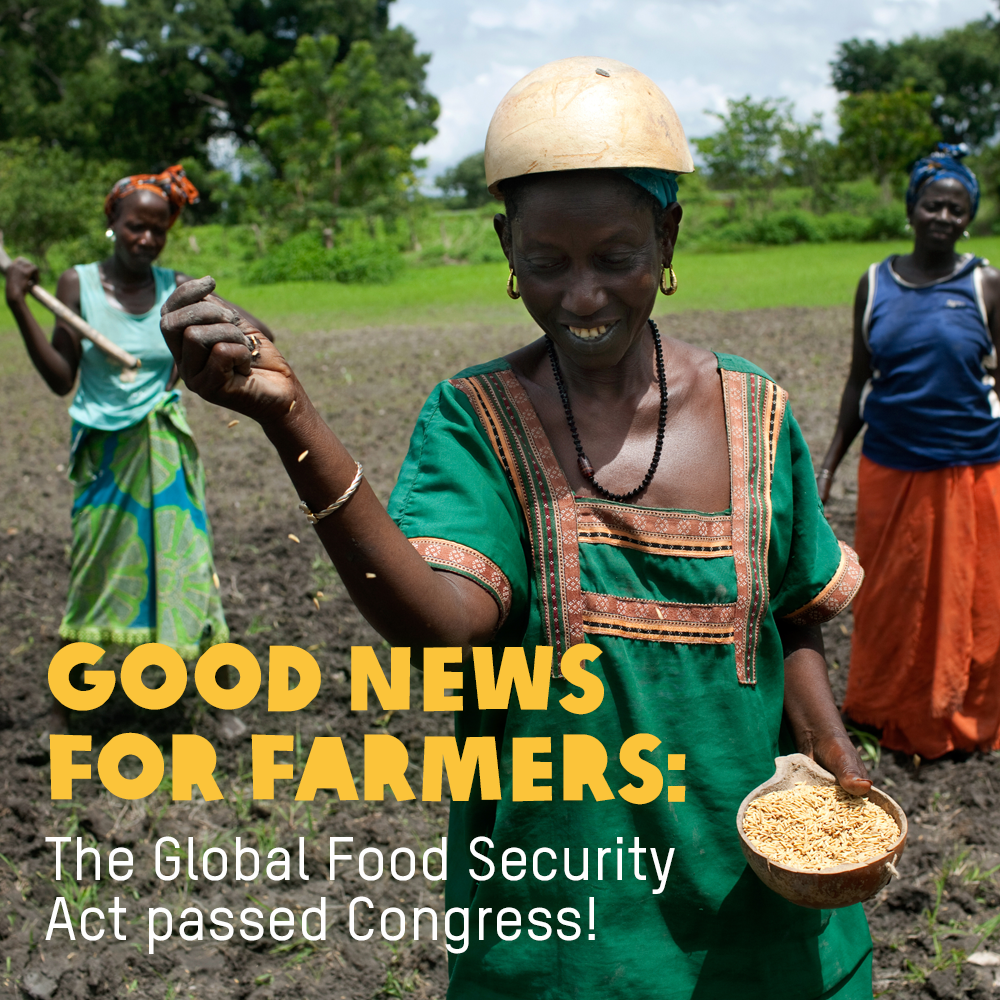