Instead of building legal and physical walls blocking people from coming to the US, why not fight the poverty, corruption, and conflicts that send them fleeing here?

I was recently talking with students at a high school in Dakar, Senegal, and took a peek into one of their classrooms – it was nicer than most I see in West Africa, but I suspect teachers and students here in the US might not think it’s so great. The desks were pretty well used, and should have been replaced a decade ago, the walls needed a new coat or two of paint, and the floor needed a good sweeping.

But at least they had desks. One primary school I saw in the Niger Delta, in the part of Nigeria that produces all its oil, had been recently destroyed in fighting between militias vying for control of oil pipelines crisscrossing the area, carrying billions in crude oil. It had no desks at all. There were a few rough boards, supported by stones, on the dirt floor.

If you ever wonder why so many people want to come to the US, look at the photo of this school for part of the explanation.

Before we all rush off to build schools in Nigeria and Senegal, we should consider why the people responsible for education in these countries can’t do it themselves. They might blame a lack of money, but in oil-rich Nigeria this seems like a half-truth – the real problem is more like a lack of priority.

Here at Oxfam we believe we should help citizens push their elected leaders to do their jobs, and build them the schools they need. (And the hospitals, roads, and provide training for small-scale farmers…I could go on here but you get what I mean. The stuff that helps poor people.)

While I was in Nigeria, I asked one former village councilor named Gaius Ajuro what he and others could do to get more resources for their town.  “If we could know how much oil companies pay the Nigerian government, we would hold the government responsible,” he said.

Sounds simple enough, but information like this is surprisingly hard to come by. Without oversimplifying a complicated issue, there is a solution: Require companies to publicly disclose payments (taxes, royalties, etc) they make to governments so people like Ajuro can ask how much of that money the government is investing in building schools, and now much is going into Swiss bank accounts and second homes in southern France.

Most important oil, gas, and mining companies now do this in compliance with laws in the European Union, Canada, and Norway. But the companies listed here in the US are not yet disclosing payments. They are supposed to as part of the Cardin-Lugar provision (passed with bipartisan support and signed by the president in 2010) as part of Wall Street reform. The part of that law mandating disclosure was developed by Senators Cardin and Lugar, two men from different parties who came together to seek a solution to this very problem. The oil industry has been fighting the disclosure requirements in court, so it’s been delayed. Oxfam fought back in court and the Securities and Exchange Commission finally issued regulations to implement the law last June. Now, Republican party members in the US House and Senate (some of whom took millions of dollars in campaign contributions from oil companies) are proposing to do away with the Cardin-Lugar requirement all together.

The attempts to kill the Cardin-Lugar disclosure rule are taking place slightly outside the main focus of the news right now as people across the country are protesting our new president’s executive order blocking refugees and people from seven (predominantly Muslim) countries from coming to the US. The discriminatory, anti-immigration, anti-refugee sentiments driving these radical measures and the disclosure rule gutting going on this week are actually related, but working against each other.

People are immigrating to the US and Europe in search of a better future, where their kids can go to a decent school safe from violence. Some of them are coming from countries rich in natural resources, but mired in poverty and conflict. These governments get plenty of money from oil companies, but no one knows what happens to it after that. The corruption feeds violence and instability, creating more refugees seeking safe haven.

If we are serious about solving the root causes of this crisis, we need to look at ways to help people hold their local and national governments responsible for using their tax revenues (from oil or any other sources) for schools and other social goods that will fight poverty.  If we don’t we’re just giving a green light for bad leaders to continue to rip off their own people, increasing the migration pressures so many here in the US worry about. People want to come here because they’re poor and because their lives are in danger, so let’s do something about that instead of making it harder for them to hold their governments accountable to its citizens.

The Cardin-Luger rule is fighting for its life right now in Congress. You can help it survive, and strike a blow against poverty and corruption.  Call your Senator right now, ask her (or him) to vote NO on Senate Joint Resolution 9 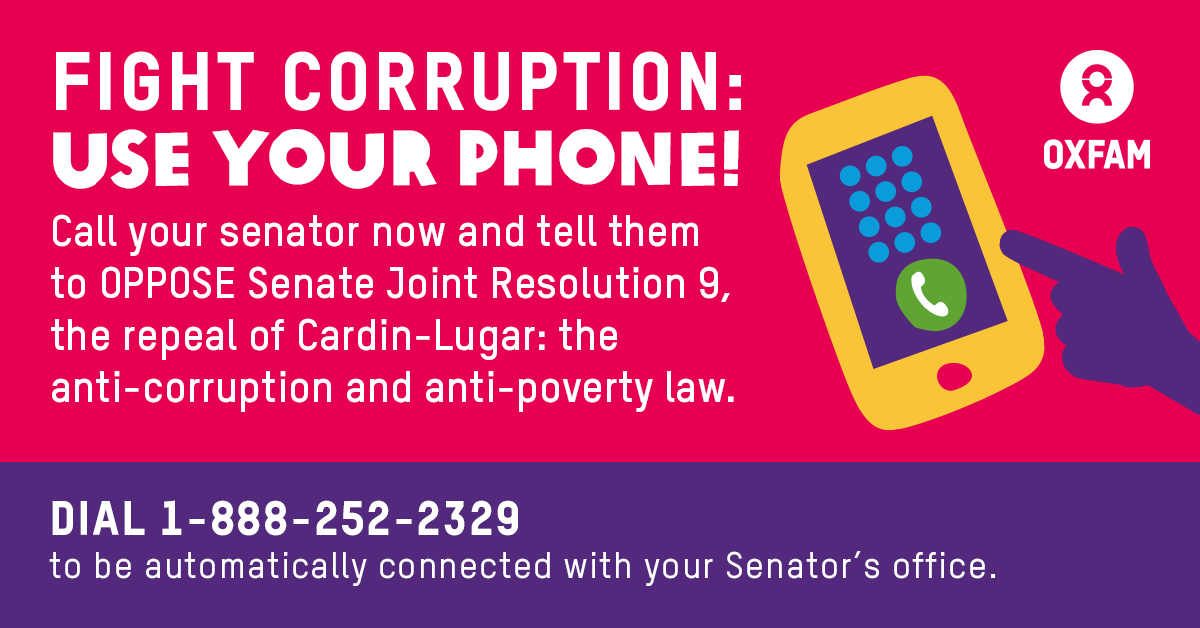