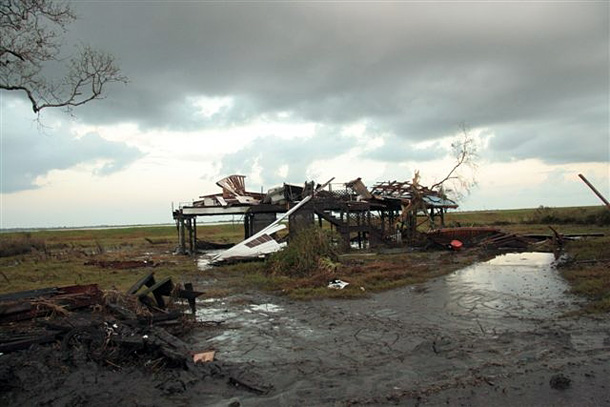 The atmosphere in the Gumbo Shop, a long-established restaurant in New Orleans’ French Quarter, was celebratory. And so it should be. The city, so traumatized by Hurricane Katrina three years ago had, despite dire predictions, been spared the wrath of Hurricane Gustav, which had veered westward before making landfall. The whole city had evacuated, but now people were coming back, and getting on with their lives again.

The near normalcy of New Orleans seemed a world apart from where I’d been just the evening before. Barely 100 miles away, Isle de Jean Charles, a bayou community of 220 Native Americans in Terrebonne Parish, had not been as lucky.

My first attempt, two days after the hurricane to get to Isle de Jean Charles was a bit harrowing. The causeway that leads to the island was, in many places, underwater. My colleague Kate and I agreed that as long as we could see the road marking through the water we would continue. We used our satellite phone to check with  the Coast Guard, and were relieved to learn that high tide had just passed.  We drove as far as we could: to the edge of the village. From there, the road was too submerged for our minivan to pass.
The island was eerily silent, populated only by the herons and egrets that perched on poles and fences. The inhabitants had left under a mandatory evacuation order. It was painfully clear that many of the inhabitants would not have homes to return to. Learning from previous flooding, some residents had hoisted their mobile homes onto raised platforms. But Gustav had ripped through many of these homes, stripping off their cladding and carrying away their contents, leaving only a skeletal frame. One house was washed off by the tidal surge and now lay at a 45-degree angle on a sadly ineffective earthen levee built to protect the village.

Three days later, I returned to Isle de Jean Charles after the flood water subsided. My guide was Natalie, a local mail carrier who also runs a wellness program for an organization called Bayou Grace Community Services, one of Oxfam’s partners. My worst fears were confirmed: The wind and water had completely destroyed house after house.

Life was better here once, Natalie told me. A good living could be made from shrimp fishing supplemented by cattle rearing. But then came cheaper farmed shrimp and large boats, pushing out the smaller fishermen. And coastal erosion has eaten away at the grazing land that once supported cattle.

I’m not sure what it will take for the community of Isle de Jean Charles to survive.  After Hurricane Rita, church groups built two houses that weathered this storm largely unscathed. These are solid structures, built on raised platforms by teams of volunteers. There is talk now of groups getting together to build 25 of these ”lift houses” to replace those lost, but it is far from clear where the money will come from to support this project. And with Hurricane Ike now set to bring devastation to Texas, the needs of Louisiana’s bayou dwellers risk getting lost in the deluge of news about another disaster–even as Ike’s storm surge swells toward Louisiana again.