What a week to launch a blog about humanitarian work.

It’s been a week that has seen the death toll from the May 3 cyclone in Myanmar inch upward as Oxfam worries about the outbreak of disease among survivors and the United Nations warns that 2.5 million people are now in urgent need of aid.

It’s been a week of heartbreak and horror in China, where a massive earthquake—the most devastating in 30 years—rocked the southwestern province of Sichuan leaving thousands of people dead, many of them children caught in the collapse of a suburban school building. Headlines have reminded readers that for many families in China, one child is all they’re allowed to have.

And it’s been a week of forgetting—unforgivable, perhaps, but understandable. 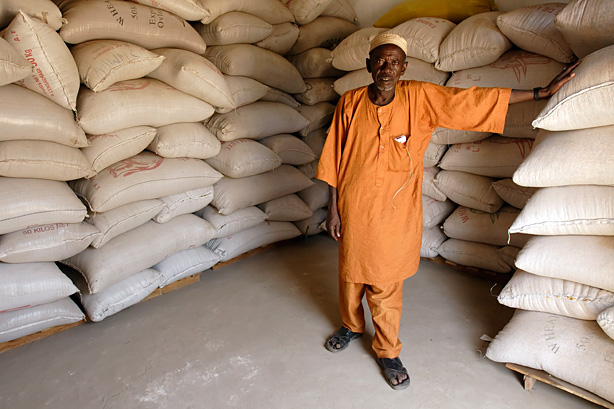 As I got to the bottom of the pile of assignments on my desk yesterday, a picture caught my eye. A thin man with his arms folded and his brow wrinkled was staring from the photo—reminding me, suddenly, that a problem even bigger than a devastating cyclone and a 7.8 magnitude earthquake was gripping the globe: a food crisis. Behind him, almost reaching to the ceiling, climbed a stack of grain sacks—the little bit of insurance that the town of Dasilami in Gambia has to ward off hunger, a condition that’s no stranger to people there. And beneath him was this quote from Ban Ki-moon, the secretary general of the UN: “We risk …the spectre of widespread hunger, malnutrition, and social unrest on an unprecedented scale.”

The global food crisis. How could I have forgotten?

I know how—and the answer is unsettling. It’s called information overload, and if it’s momentarily sinking me, whose job it is to pay attention to world crises, what must it be doing to donors and constituents and the public in general?

Maybe that’s where this blog can help.

My goal is to help readers remember the places and people that are too easy for many of us to forget—people like Marie Kanyobayo in the Democratic Republic of Congo where conflict and hardship have left 5.4 million people dead since 1998. Kanyobayo is now working to educate villagers about the rights of women and families and the peaceful pursuit of democracy. Or Tato Boru, a mother of five children and the leader of a women’s peace council in drought-prone southern Ethiopia where tension over a shortage of resources can trigger disputes. Or Abdulie Camara, a woodcutter in Gambia, who last year was sharing his small mud-brick house with 45 people—many of them refugees from a conflict in the Casamance region of Senegal.

I won’t forget them, where they live, the struggles they confront. And with any luck, I might be able to help you come to know and care for some of these people and places, too. Empathy is the best defense against forgetting.