Sarah Peck is Oxfam’s email advocacy writer. In honor of Earth Day, she reflects on her own experiences working in a community where natural resources are threatened. 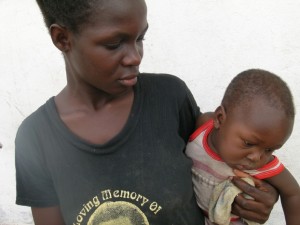 In 2003, I walked down the dusty road of a diminished gold mining village in Dumasi, Ghana, where years of gold extraction had destroyed lives and livelihoods. It was an eye opening experience for me, seeing this place.

One of the clearest memories I have from my time in Ghana was examining the water in Dumasi, which was literally making people sick. I was working as a writer with the Canadian NGO Journalists for Human Rights, documenting some of the impacts of the mine on the local community.

What I found was distressing. Chemical runoff from the mining process had destroyed the local water sources, and made nearby land untenable for growing the community’s food. People were sick from the arsenic and cyanide present in the land and water. Health issues in the community were rampant. Almost every other community member I met suffered from skin ailments, ailments exacerbated by lack of access to clean water. And, a community that formerly had active and bountiful farms now had far less fertile land.

I was thinking about my time in Dumasi last week as I began writing a letter Oxfam is sending to Congress about climate change. My job at Oxfam is to translate our policy goals into actions for our supporters, and I was debating the best way to make climate change – and how it’s affecting the world’s poorest people – more tangible to people who might feel disconnected.

How could I explain what Oxfam means when it says ‘the world’s poorest communities will be hit the hardest’ by climate change?

But then I thought a bit about my own experiences working as a journalist. In Ghana, I saw how poverty made communities far more vulnerable to the unwanted advances of mining companies. These communities were already experiencing diminished resources as a result of mining. But what if, on top of this, drought related to climate change were to take place? What if Dumasi’s farmers had this secondary threat to their crops and livelihoods? It’s a prime example of how a bad situation can quickly become far worse.

Without help, these communities, whose land is already damaged and polluted, their water sources dangerous – they will struggle to adapt.

That’s why today, Earth Day, Oxfam is asking people to show your support for communities hit hard by both poverty and climate change.

With our support, communities like those in Dumasi can overcome the negative effects of mining as well as the impacts of climate change. They can plant drought-resistant crops, or better plan when they plant and harvest around changing weather patterns. They can protect and ensure local water sources viability. These kinds of adaptations will ensure that people like the ones I met in Ghana’s mining communities have the tools they need face poverty and climate change head on.