World Refugee Day, June 20, isn’t a date I usually mark on my calendar. But this year, I think it’s worth paying attention. Amidst all the recent news reports on Syria, one thing has been missing from the headlines – the people. Two years of intense civil war in Syria have caused one of the biggest refugee crises of our time. The effects of the conflict have forced an estimated 1.6 million Syrians to leave their country to escape the conflict, while at least another 4.25 million people have been displaced from their homes but are still living inside the country. The numbers are staggering and growing every day.

It can seem like the conflict is too big, too messy, or too far away, but especially today, let’s remember that our actions can make a big difference for those who have lost everything. Here are five ways to help:

The scale of the need is massive, but every little bit helps. It doesn’t have to be much; for example, just $5.50 can buy a family in Jordan 10 bars of soap and $20 can buy a pair of  water collection and storage containers for a household in Lebanon. Both items are extremely valuable in the summer months when water conservation and proper sanitation efforts are critical to ensuring health among refugee populations. Donate now to support Oxfam’s efforts.

SMRTE (Syrians Must Release Their Energy) are a music group in Zaatari refugee camp in Jordan. Oxfam is supporting them through our partnership with the Voice Project, which helps refugees share their stories and concerns. This video gives viewers a unique insight into family men, musicians, and refugees who are using music to cope with life in the camp.

This interactive map lets you see both the far-reaching effects of the crisis in Syria and the ways your donation can help. Oxfam aims to provide essential aid to 650,000 people who have fled their homes to escape the violence, and the map includes photos and videos of water tanks and water taps in progress, as well as completed projects. Zoom in on the Zaatari Refugee Camp to see the sprawling area that now shelters more than 100,000 people,

Starting today, Oxfam in the UK is releasing a series of Spotify playlists created by the xx, Editors, Two Door Cinema Club, Bombay Bicycle Club (above), Syrian musicians, and many more to help raise awareness of the massive humanitarian crisis currently affecting Syrian people. A new playlist will be released every day from today until the start of the Glastonbury, UK, music festival on June 27 – so check back daily to get inspired by music – and share with your friends! 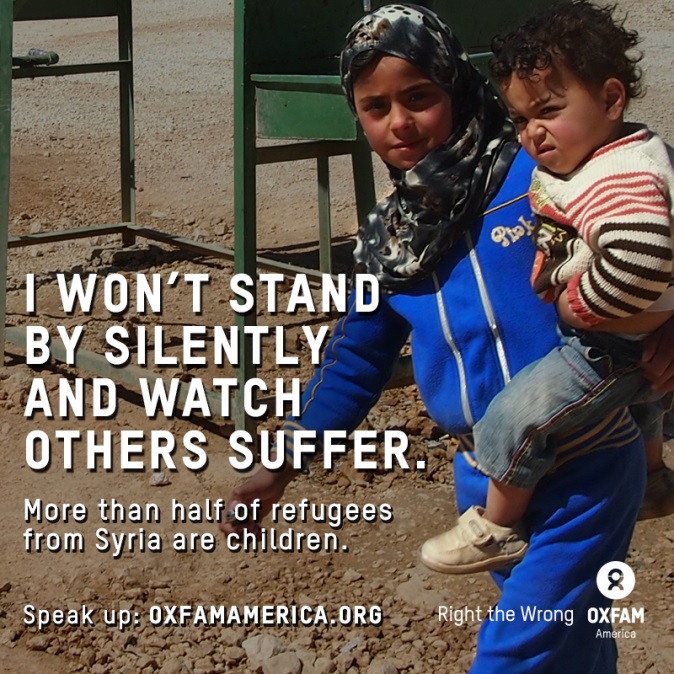 As human rights activists and humanitarians, we refuse to stand by silently and watch others suffer. But one of the major challenges we’ve faced is simply getting attention on the human element of this emergency, so to raise awareness we posted this image, and YOU can help us by sharing it on Facebook. The more people who are exposed to the realities of the current refugee crisis, the more likely it will be that we can grow the global movement for making peace in Syria a priority.