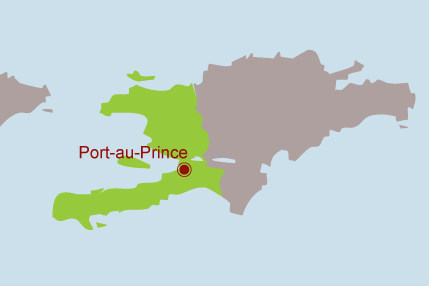 Lots of worry about Haiti here at Oxfam America today: we are concerned about our colleagues based in the country, and the relatives of our friends like Sophia Lafontant. At least two of our colleagues here in Boston used to work in Haiti for Oxfam and other organizations. They have friends who are no doubt struggling to recover.

So how can we find out what is happening while our friends and colleagues in Haiti get to the grim tasks at hand? This morning we took a good look at the media and one thing is for certain: Technology is changing the way we report on disasters like yesterday’s earthquake. With so much information available via cell phones and digital cameras, news agencies and others can learn things very quickly as long as the internet and wireless telephone networks are functioning. That’s a significant “if:” Our colleagues in England reported late last night, “One SMS was received from a member of the [Oxfam Great Britain] team indicating that most staff are well, however it has been impossible to contact and gain more clarity from the team.”

When the sun came up in Haiti this morning, Oxfam’s team and many others started to get their messages out. Some news outlets are passing on text messages, twitter posts (“tweets”), and other unconfirmed news. The BBC’s page on the Haiti quake is a good example: it is a series of “live” posts, one of which relays a dawn tweet:  “Aftershocks continued all night long. The sun went down shortly after the big quake. It is up now. It is eerily quiet.” Most US-based newspapers and other media outlets in markets with many Haitian-American residents are relaying frantic stories of people trying to get word about their family and friends in Haiti, some of which are coming in from Facebook pages and twitter posts. The Miami Herald is sending their reporter Jacquie Charles to Port au Prince, and this morning she was tweeting from the runway at Miami International (“Leaving 4 haiti now ffrom MIA,” she wrote, no doubt leaving many old-guard journalism professors confused). The Independent in England reported this morning that the Haiti earthquake was ranked third in global twitter traffic after Google’s disagreement with the government of China. (The number one most talked about subject on twitter today is music and movies.)

YouTube is also a source of info: By noon today the New York Times’ Lede Blog featured a video from the streets Haiti’s western city of Les Cayes. It’s a chaotic, nightmarish one-minute look at the damage and a stunned group of people.

If you want to get in on the act, here is something you can tweet:

Oxfam is on the ground in #Haiti after 7.0 magnitude earthquake hits. You can help now – please donate. http://bit.ly/8mrTkR
And for your Facebook page: 7.0 magnitude earthquake hits Haiti. Oxfam’s response will include providing clean water, shelter, sanitation and helping people recover. Please donate to our Haiti Emergency Response Fund today: https://secure.oxfamamerica.org/site/Donation2?df_id=3560&3560.donation=form1