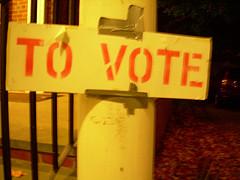 Last night I took my place inside the booth, only partially hidden behind a frayed red, white, and blue curtain. Balancing my paper ballot on a wobbly, dented metal shelf, I carefully filled in the circles using a thick black marker. After I stepped out and slid the completed ballot into the machine (wondering the whole time if I was putting it in backwards) the woman working the polls handed me the emblematic sticker—“I voted today.”

And I wasn’t alone. According to Politico, more than 130 million Americans also cast their ballots yesterday—the most ever to vote in a presidential election.

Some had an easier time than others. A friend of mine waited for two and a half hours to cast his vote in Boston’s South End. Stories of voting problems and long lines filled the evening news as we waited for the results to trickle in.

But I should have known that all of us would do whatever was necessary to have our say. When I made “get out the vote” calls two nights ago, every single person I reached—elderly people in Pennsylvania, families living on an Indian reservation in northern Montana—told me that they planned on voting the next day. Without hesitation, they assured me that yes, they knew where their polling place was; no, they didn’t need a ride; and yes, they would set extra time aside out of their day to get there. Though most were polite, I also felt a kind of cheerful exasperation coming through—of course I’m going to vote, why are you calling me, when this is a no-brainer?

I thought of those phone calls when I saw the big cardboard sign duct-taped to a post outside the entrance to my polling place. In bold, stenciled letters, it read: TO VOTE.

I took a photo of the sign because I liked its simplicity. It seemed right somehow, the way it presented just the act itself, without slogans, conditions, or party affiliations. After all, no matter where we live, or what we believe in, 130 million of us took the same action yesterday. We voted. And given the historic outcome of this election, none of us can doubt that it mattered.