In Peru, communities of migrants live in makeshift settlements that are at risk of deadly fires. Oxfam partner PREDES has figured out how to make a difference.

Each time I return from a trip for Oxfam, I have a sharpened awareness of the safe cocoon I live in. The water that flows from the tap won’t infect my family with typhoid. Droughts don’t leave us hungry. Our house isn’t perched on the edge of a river or ravine, so a heavy rain won’t put our lives at risk. And no one is dropping bombs on my neighborhood.

Now fire is on my mind. Anyone’s house could catch fire, but my family has layers of protection, from smoke detectors and running water to safe stoves and electrical systems to a well-equipped town fire department—plus insurance that would cover our losses if all else failed. But on a steep mountainside outside Lima, Peru, in a community named Las Rosas de San Juan, I recently met with people living in makeshift wooden houses who have none of these things. A spark from a dodgy electrical wire, a gust of wind, and poof! Hundreds of homes could go up in flames. It has happened.

Yet, as I learned, this community is far from helpless. Oxfam partner PREDES, the Center for the Study and Prevention of Disasters in Peru, has been working in the hillside settlements since 2009 to strengthen local capacity to handle emergencies like fires and earthquakes. PREDES and the municipal authorities work hand in hand, each complementing the other’s programs, and the results have been impressive. Escape-route signs and well-marked fire extinguishers dot the landscape, and the community members I met were able to demonstrate a speedy evacuation, a rescue by stretcher, splinting a “broken” arm, and CPR.

Their fire-fighting skills had actually been put to the test a week earlier, when resident Liliana Lliuyacc spotted smoke coming from someone’s home. Instead of running for her life, she called for help, and she and her neighbors—rushing to the scene with fire extinguishers and buckets of sand and water—were able to smother the flames.

Lliuyacc cheerfully brushed off appreciations for saving lives and homes, but everyone knew that without quick action, their community might have burned to the ground.

For years, Oxfam and PREDES have been leading an effort to help communities, national and international organizations, and government authorities in and around Lima prepare for emergencies. They have set up a roundtable of agencies and organizations that work on emergency water and sanitation, and created a protocol to clarify the roles of each of the key actors.

In the early hours of a November morning in 2016, the group sprang into action. On a desolate piece of land near a city dump in Lima, the makeshift settlement known as Cantagallo had gone up in flames, and more than a thousand residents—most of them indigenous Shipibo people from the Amazon—were suddenly homeless.

“The fire broke out early on Friday morning; by that afternoon, the local government had made a shelter site available, and we had set up clean water and latrines there,” said Arturo Liza, a risk management specialist at PREDES.  “Oxfam provided the equipment—a water bladder, tap stands, and latrines—and PREDES set them up. A quick response like this requires a lot of coordination and prior planning. Oxfam and PREDES worked with civil defense, health, and water authorities to make this happen.”

I visited the shelter area a few weeks after the emergency and was struck by its cleanliness and order.  Family-sized tents were arrayed across a small field, and people were collecting water at a nearby tap stand. There were latrines, sinks for washing laundry, and stalls for bathing. There was a dining area under a tarp set up with tables and chairs, and I learned that residents had access to three free meals a day.  Security was clearly a priority: police guarded the entrance to the shelter area, and the bank of latrines for women and girls was set up at a distance from the facilities for men and boys. There was an area set aside for free donated clothing, and anyone needing health care could step into a mobile clinic on the site.

I sat down with Lidia Nostroza, a young mother, to talk about the disaster. “I was working at home when the fire broke out,” she said. “I grabbed my son and ran. My sewing machine and everything else was burned, but for me the most important thing was my son.” She held him close.

Nostroza felt the authorities and PREDES had responded quickly and well to the emergency; what weighed on her was that soon the shelter would close and she would have to move on—perhaps back home to Amazonia.  The poverty that made her community vulnerable to fires in the first place would surely be deepened by the disaster.

Still, the fact that all the key local humanitarian agencies and organizations could come together for a rapid and successful emergency response was a big step forward.

“Thanks to the protocol we’ve developed, we knew how to coordinate. Without it, it would have taken more time to decide who was responsible for what, and whom to ask for help,” said Claudia Salas, who works for Lima’s Department of Health Management and leads the roundtable.  “It was a good response.” 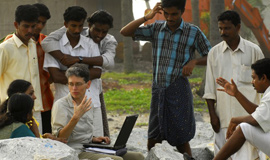 Elizabeth Stevens writes stories and reports about Oxfam’s work on humanitarian emergencies. She is a former environmental activist and freelance writer.