But fight against corruption and poverty not over

There’s one thing I’m willing to admit: I’m a sucker for a good story. And Senator Sherrod Brown (D-Ohio), told a pretty good one last night on the floor of the Senate. It was about Exxon depositing millions into a bank account in Washington, DC; an account controlled directly by President Obiang and his family from the small, impoverished, oil-producing country Equitorial Guinea.

“Instead of paying the national treasury, the oil companies made payments into this account in another country, controlled by a dictator and his relatives,” Brown said. “I can’t believe we in this body support that.”

With Exxon’s help, Obiang was using his country’s oil wealth as his personal bank account. Literally. Meanwhile, his country is one of the poorest in the world, despite all that oil.

OK so maybe when I say “good” story, it may not be an entirely happy one, but it was well timed at least. Sen. Brown was urging his colleagues in the Senate to vote against a proposal to annul the Cardin-Lugar transparency rules passed as part of Wall Street reform in 2010. The rules require companies like Exxon to state what payments they make to governments, to ensure we don’t have these kinds of payments directly to corrupt officials and their families.

Brown and our other allies in the Senate did not succeed in their efforts to protect Cardin-Lugar, but at least we went down fighting. We lost this vote 52-47, but we succeeded in exposing the fact that our new Secretary of State Rex Tillerson, the former head of Exxon, personally lobbied against this rule in 2010. We also ensured several members of the Senate from both parties went on the record to urge the SEC to write a new rule that is consistent with those on the books in over 30 countries.

On the other hand the opponents of the rule in the Senate, including Senator Inhofe (R-OK) who introduced the joint resolution (Brown referred to the resolution as “The Kleptocrat Relief Act”) along with a litany of untrue claims from the oil industry has, have exposed themselves as elected representatives of the Oil Lobby. They’ve accepted millions from the oil industry and are now officially on record backing corruption.

“Shame on the Senators who voted for corruption today,” our colleague Isabel Munilla says, quite fairly, in a statement we released this morning. “Senators gutted a major bipartisan accomplishment that would bring sunshine to the payments oil companies make to despots and dictators.”

Congress may have eliminated a rule, but we still have the law. So the fight for transparency is not over.

We’ve been working on this transparency issue for more than a decade here at Oxfam. It’s always going to be a long fight, so while we consider our next step, it’s appropriate to recognize the role our supporters have played in urging our elected representatives to stand up for fighting poverty and corruption. Tens of thousands of Oxfam supporters have signed petitions, sent letters to our elected representatives, and raised awareness about this crucial issue area. Just in the last few days you helped make more than 6,000 calls to your members of Congress to urge them to vote against corruption, and strike a blow for transparency.

This is just one battle. We need all of you who are fighting with us to keep going, on this and many other issues. If you called your Senator this past week, consider it good practice. The way things are going these days, you may be calling again soon. 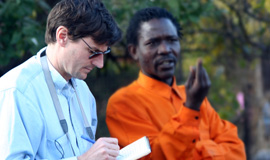