Oxfam America’s president Ray Offenheiser, director of humanitarian response Mike Delaney, and director of media Matt Herrick are in Jordan and Lebanon this week, visiting Oxfam’s efforts to help refugees from the conflict in Syria. Below, Herrick shares four observations from his trip.

#1: September 15 used to mark a new school year for millions of Syrian children.

According to UNICEF, as of February, one in five schools in Syria had been destroyed, damaged, or converted into shelters for internally displaced people and fighting forces. This week in Jordan and Lebanon, I’ve met dozens of Syrian refugee families who have put their children’s education on hold after being uprooted by the conflict. At Zaatari camp, although schools inside the camp can accommodate 15,000 students, just 3,000 attend. Instead of school, non-camp refugees as young as 9 are working day jobs to help struggling refugee families make ends meet. I met a small, dust-covered boy in Jordan who worked in a cement factory. Overall, millions of Syrian kids won’t return to school this year.

While I haven’t watched pro wrestling since the days of Andre “the Giant,” Jimmy “Superfly” Snuka (or “Snooker,” as my grandfather called him) and Koko B. Ware, I still have a soft spot for a good sleeper hold. Until this week, I had never heard of John Cena. But every Syrian boy I met has. How many John Cena t-shirt wearing Syrian boys did I meet across two countries? Six. And each one can flash a mean bodybuilding pose and could probably throw you in a figure-four leg lock before you know what’s happening.

It’s a little-known fact that roughly 80 percent of all Syrian refugees live outside the borders of refugee camps: in apartments, in crowded homes with extended family, in abandoned buildings, or in informal tented settlements within poorer urban areas. The sheer volume of refugees is stretching resources in Jordan, Turkey, Egypt, Lebanon, and Iraq—all host countries accommodating the flood of refugees. Yet foreign assistance so far is nowhere near the level of need. In urban environments in Lebanon and Jordan, aid just doesn’t seem to be reaching Syrian refugees in a clear, consistent way. In many cases, a patchwork of civil society, NGOs, and the UN help to meet a fraction of a family’s needs. I met diabetic children whose parents cannot afford necessary insulin; thin, tired children who are not receiving proper nutrition; and far too many children exposed to vulnerabilities such as unsafe working conditions and sexual exploitation.

#4: When kids are dirty, they need WASH.

Ever had a three-year-old child? Well, I do. Using the bathroom is still a challenge. And when he doesn’t have a new scrape, he’s covered in a fine film of filth. For children and families in crisis settings, Oxfam may have no more important program than its Water, Sanitation and Hygiene Promotion work, known as WASH. Oxfam’s WASH work addresses the disparity in water and sanitation coverage worldwide. Globally, nearly 800 million people lack access to clean drinking water and 2.5 billion to proper sanitation. Oxfam believes everyone, including the most marginalized, has a right to safe water and sanitation as a basic essential service. In Jordan’s Zaatari refugee camp, Oxfam’s staff developed a fun, engaging WASH promotion program to empower Syrians.

Want to help? Donate now to help provide essential aid to refugees, and then make your voice heard:Write to your members of Congress and ask the US to help pursue a peaceful, political solution to end the bloodshed in Syria once and for all. 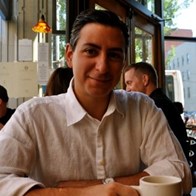 Matt Herrick is the former director of media and public relations at Oxfam America. Before coming to Oxfam, Matt worked as a senior communications official at the US Department of Agriculture. He is a former journalist and international development professional with experience in Afghanistan, Peru, Kenya, Uganda, UAE, and the Philippines.