This week, right after the UN voted to adopt the first ever International Arms Trade Treaty, Oxfam America president Ray Offenheiser did an interview for Public Radio International’s The World about the meaning and impact of the treaty. He addresses questions like: How big of a deal is this? Does this have any impact on current armed conflicts, like the one in Syria? Will this have an impact on US gun control? You can listen to the interview below:

The US, along with 153 other countries, voted YES to make sure the world will be a safer place, while facing tough opposition from powerful lobbies like the NRA, which spread misinformation and lies about the treaty.

Take a moment to thank President Obama’s administration for their work on making the Arms Trade Treaty strong and effective, and urge him to sign onto it as soon as possible. 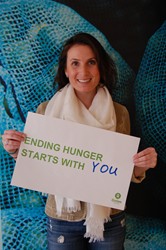 Victoria Marzilli is a New Media Specialist at Oxfam America focusing on social media. Her goal is to inspire, engage, and connect Oxfam supporters online.