As you may have read in my colleague Bob Ferguson’s latest blog, Oxfam has a lot of really cool friends. Musicians and actors, they use their power as celebrities to bring attention to the poverty and injustice Oxfam works to overcome. Today, many of the amazing women we work with are marking International Women’s Day with blog posts of their own, calling attention to the idea that women are disproportionately affected by hunger, but at the same time, are in the best position to combat it.

Here are some excerpts:

Actress Kristin Davis writes about the quiet revolution on The Huffington Post:

“…women are also key agents of change in their communities, and they are fighting back against hunger. I will never forget the women of Chitehwe, a small village in Mozambique in Southeast Africa I visited with Oxfam. Many of the women I met are illiterate, HIV-positive and desperately poor. But they aren’t giving up hope and are taking things in their own hands, fighting back however they can.”

Also on the Huffington Post, singer Annie Lennox discusses reclaiming feminism:
“Whether you’re a woman or a man, this affects you. And you are part of the solution. The impact of inequality is felt by every woman worldwide — your friends, your family, your colleagues, your neighbors, the people you emailed today, the woman in the car next to you, the faces you saw on television and the voices you heard on the radio. How many have been abused or faced discrimination today?”

And musician Thao Nguyen blogs about finding your passport at Bitch magazine:
“Note that this year presents unmatched urgency. We have real live sensible plans in hand to combat hunger and poverty that will also empower women as the invaluable resources they are. Women are finally enjoying wider political and social recognition as the true agents of effective change. That is certainly a positive mark of motion but it is nowhere near the end of our work.”

Take a few minutes to read what these women have to say.  And then follow their advice and take action in support of women worldwide. Help us reach our goal of inspiring 35,000 supporters to send letters to Senators asking that they oppose any budget cuts to programs that benefit the world’s poorest women. 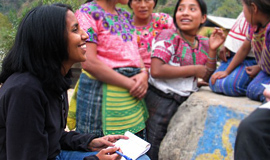 Andrea Perera is the Director of Communications at Oxfam America.