It’s been mentioned before on this blog that the motto of Oxfam America’s concert outreach work is “We Believe Music Can Change The World.”  That motto has never seemed so true to me as it did in the middle of the night last night.

I normally work from my home office just outside of New York City, but I happen to be in Boston on a regularly scheduled trip to Oxfam’s HQ.  As my workday ended yesterday and I was leaving the office, I noticed a breaking news alert on the TV in Oxfam’s lobby, announcing the first reports of yesterday’s devastating earthquake in Haiti.  Having friends and colleagues in and around Port-au-Prince, I was shocked and saddened to hear the news.

I made my way back to the hotel, and rather than decompress with my normal regimen of bad food and even worse TV, I was glued to CNN’s reporting on the situation in Haiti.  Because most power was out and night had already fallen there, details were few, and sadly, mostly grim.

By 9:00pm, my cell phone started buzzing with texts and calls from friends of Oxfam in the music world.   Bands were asking me how they could lend a hand.

Managers were looking for a link that they could Tweet out to fans on behalf of their clients.  Labels were asking for advice on how to use their media people to get word of our work on the ground out to their contacts.    The calls continued through the night, as the music industry doesn’t really have traditional closing hours.

At 2:30, I got a call that convinced me that we are, in fact, onto something by working through music to help save lives.  It was from a musician who works with us, and whom chances are you’ve heard on TV or the radio recently.   He said he was wide awake in London, after staying up all night watching reports from Haiti on the BBC.  He called me hoping I was still up and that I might be able to put him to work right away.  “I know you guys have people in place in Haiti already, and I see how you have handled these situations in the past.  Please put me to work.  Really…I want to help you help these people”.

I was shocked at the fact that this guy who leads a pretty cushy lifestyle thanks to his musical talent wanted to drop everything and give us a hand, strictly based on our reputation of expertly administering help and solutions in the time of crisis.  Proof, to me anyway, that our work in music can and does make a difference.

After all the calls of inquiries, support, advice, and concern, I was able to eventually doze off and catch a few hours of sleep before meeting up with colleagues early this morning at the office.  I grabbed a coffee, hopped on the web to check Twitter to see what my friends were up to, and was amazed to see that all that middle-of-the-night chatting had turned into a remarkable outpouring of support from artists, radio station, record companies, and other friends in the industry!  There were mentions of our work and pleas for fans to donate from a wide range of supporters like Coldplay, Nada Surf, Switchfoot, O.A.R, Questlove of The Roots, Street Dogs, Michelle Branch, Yoko Ono, Anberlin, Camera Obscura, State Radio, OK Go, and many more.

I was also pleased to see fans of those bands “reTweeting” those messages as well.  The more people that know about the need to support our work in Haiti, the better.  If you’ve got a Twitter account, I encourage you to pitch in as well.  Please Tweet the following message out, as soon as you can:

Oxfam is already on the ground in #Haiti after 7.0 magnitude earthquake hits. You can help now-please donate. http://bit.ly/8mrTkR

And if you need any further encouragement on why you should support our work, here’s why Kele Okereke of Bloc  Party is on our team; “Bloc Party supports Oxfam America because they save lives, help people overcome poverty, and fight for social justice.  They help our fans become activists, by showing them how take action to change things for the better.” 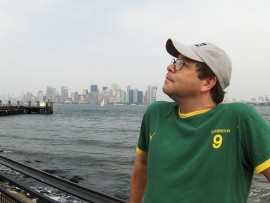