As 2008 winds down, we’re highlighting photos we think best capture Oxfam’s work this year. Here is one of my favorites–with an explanation why. More to come from others.

In this supposed season of joy, trouble fills our world: a cholera outbreak and widespread hunger in Zimbabwe, a food crisis in Afghanistan that’s threatening five million people, bursts of violence in the eastern provinces of Democratic Republic of Congo that have forced a quarter of a million people from their homes, a conflict in Darfur that has dragged on for nearly six years and wrecked the lives of millions of Sudanese—the list goes on. And that’s the killer. Where is the hope in this bottomless pit of suffering?

I think I know.

It lives in the calloused hands and across the strong backs of women like Loko Dadacha. It’s there in the way she hoists her axe over her shoulder. I see it dancing in the crow’s feet at her eyes, in the smile that she flashes at her children—even as all of them live on just one thin meal a day. This is Ethiopia, where poverty and hunger have snared 13.5 million people who now need aid to survive.

Loko is a widow and the sole provider for a grandchild and three of her six children who still live with her in their mud-walled hut in the village of Gutu Dobi. I met her there last summer, after rain had finally begun to fall and return some green to the parched pastures and fields families like hers depend on. The first thing I learned about her was that she had fallen out of a tree and smashed her leg. She wasn’t complaining, just stating a fact. What was she doing high up in the limbs? Cutting leaves as fodder to feed her animals—one of the many make-do strategies those who live close to the earth employ to keep their families alive in hard times.

Grace and competence: Those are the words—words of hope—that come to mind when I think about Loko. And I think about her a lot. I always will. 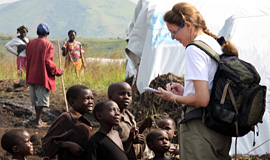